EUA's Green Bay office (formerly Performa) partnered with Gut+Science, a weekly show with the nation’s greatest leaders and CEO’s, on a sub-series of podcasts. Each episode focused on the connection between the leader, their organization’s purpose and how intentionally designed physical workspace has been a powerful tool in helping Give their Purpose the Space to Thrive. 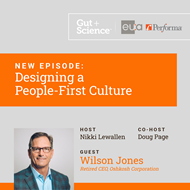 During Wilson Jones’s tenure as CEO of Oshkosh Corporation, he led the charge to adopt a people-first culture. “Performing cultures are good but performing around healthy cultures are even better.”

This episode is presented by Performa (now EUA), a purpose-driven architecture and engineering firm. As you listen, you’ll quickly understand why, even though he’s retired, CEOs keep calling Wilson for advice on how to shift their cultures. First and foremost, Wilson says if the desire for change isn’t genuine, if leadership doesn’t model the behavior, and if the suggestions don’t come from the bottom up, it won’t happen.

As the conversation unfolds, you’ll learn how this culture shift began with listening to front-line employees and acting on their desire to be engaged, developed and connected. You’ll also learn how lasting culture change happens through building relationships so your team feels like they’re doing meaningful work with people who care. You’ll also hear their journey of creating a new global headquarters that supported this culture shift.

Meet Steven McCarthy, the President and CEO of Curative Connections in Green Bay, a nonprofit dedicated to helping people with disabilities, aging concerns, and mental health challenges through a broad range of services.

As CEO, Steven has made it a point to make sure their organizational values show in every aspect of their company. In this episode presented by Performa, Steven shares ways Curative Connections and its employees model the organization’s values, allowing space for individuals and customers to thrive.

Meet Christopher Howald, CEO at Tweet/Garot Mechanical and fourth-generation leader who believes he is a steward to his employees and the business instead of just an owner. In this episode, Christopher, Nikki (host), and co-host Brian Netzel discuss surrendering control to empower your people to perform at their best.

Meet Craig Dickman, the Managing Director at TitletownTech, a venture capital organization that empowers, supports, and invests in entrepreneurs throughout their startup journey.

In this episode, Craig, Nikki (host), and co-host Brian Netzel discuss the deliberate design of the workplace experience and making purposeful leadership decisions.