Law is Constant, But Lawyers Are Not: Designing for the Next Generation

"No offense, but we don’t want to focus on design. We want a functional space.”

While this statement from Eric Olson, former partner at Bartlit Beck, currently Colorado's solicitor general, might seem like a cryptic thing to say at a new space kick-off meeting (with the designers), it set the tone very clearly: For them, function and efficiency come first.

“Our goal is to have all of our attorneys on one floor,” he continued, “and acoustic privacy is paramount.”

By contrast, consider this statement from Liz Sharrer, the chair of Holland & Hart – communicating that, for them, change and disruption should be embraced in order to maintain their competitive edge and build for the future: “We want a transformational space where the next generation will prosper; it needs to carry our heritage forward, be based in sustainable values and look toward the future.”

Outwardly, these are two very different premises. Inwardly, both are united by a clear manifesto to design for the next generation. Having all attorneys on one floor reinforces the younger generation’s desire to make connections, be mentored and capitalize on a collective brain trust. Both premises are laser-focused on efficiency, attracting and retaining the best talent, and delivering superior technology as a key part of the financial equation in order to support and engage talent.

In her talk “How Not to be a Taxi in an Uber world” in Denver in August, Amanda Schneider, president of ThinkLab noted, “The world has seen more change in the past five years than the past 30 years.” When you consider this statement in the context of law office design, it is exceptionally relevant. Law firm values are having to change exponentially in response to escalating real estate costs and evolving ideals of younger generations. Hierarchy and status may always be part of the law firm culture, but while it has traditionally been measured in terms of individual attorney space, it is now being measured more as a cultural whole. In other words, hierarchy and status are now achieved through cultural differentiation, superb technology and prime real estate. 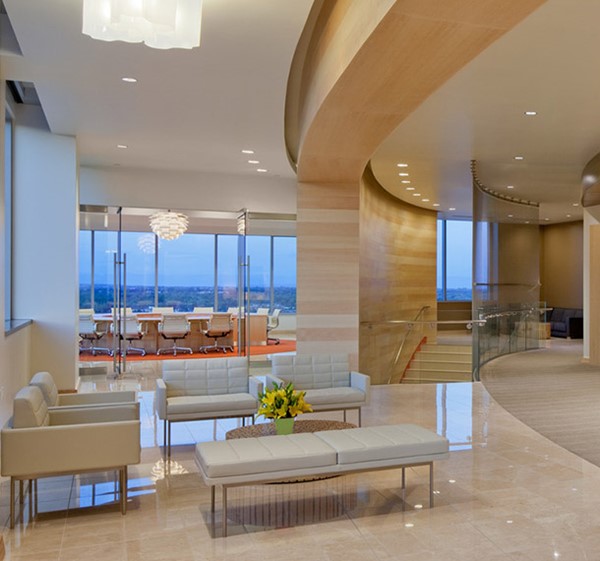 They will need to be cautious in this approach, however. Studies show that millennials and Gen-Z employees will make up 70% of the workforce in just four years. While these generations say they would like the option to work off site one or two days a week, they also want mentoring, collegiality and cultural engagement at work. This indicates that they want to want to come in to work and be part of something larger than themselves, so it’s important not to overestimate the frequency of remote work when planning an ideal law space.

In a recently published article for the Harvard Business Review by Ethan Bernstein and Ben Waber entitled, “The Truth About Open Office,” they say: “…remote work, while undeniably cost-effective, tends to significantly inhibit collaboration even over digital channels. While studying a major technology company from 2008 to 2012, we found that remote workers communicated nearly 80% less about their assignments than collocated team members did; in 17% of projects they didn’t communicate at all. The obvious implication: If team members need to interact to achieve project milestones on time, you don’t want them working remotely.”

If administrative departments can remain on site and be integrated into typical practice floors via open work areas, and if interface between attorneys and staff is promoted via thoughtful space planning, then it can be argued that these universal lessons will have a strong impact on the bottom line.

There is a striking serendipity in the timing of spatial reduction coinciding with of the values and ideals of incoming younger generations. I believe the next generation of attorneys appreciates the “less is more” or “quality over quantity” movements in law firm planning because they embrace the ideology surrounding the resulting advantages. 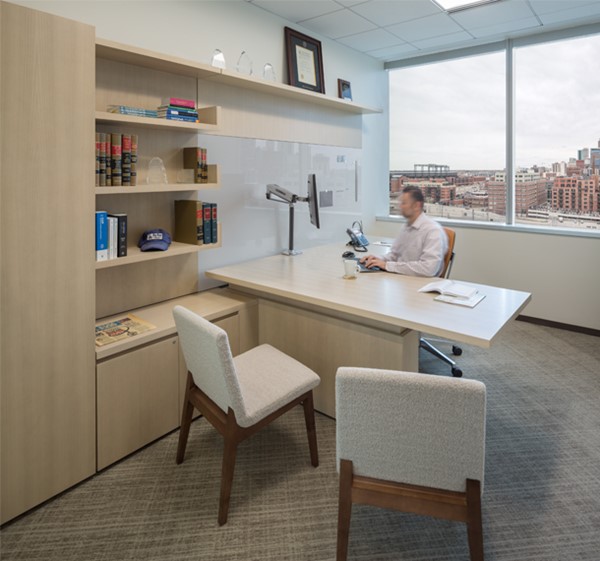 Examples include smaller, highly appointed individual offices, superior technology, sit/stand desks, individual choice of a variety of meeting spaces and the introduction of beautiful work cafés with amenities that express the firm’s commitment to their people and clients. Most importantly, they welcome heightened connections with colleagues.

Ultimately, two opposite visions culminated into two very distinctive designs – each capturing the soul and promoting the culture of their respective firms, while embracing the same new tenets of efficiency. I believe the next generation of attorneys may actually start to expect these spatial principles to be firmly in place. All things being equal, it may be that a future attorney’s final decision is most influenced by how well they connect a firm’s culture and whether the office design conveys a meaningful message.

This article was originally featured by Colorado Real Estate Journal. 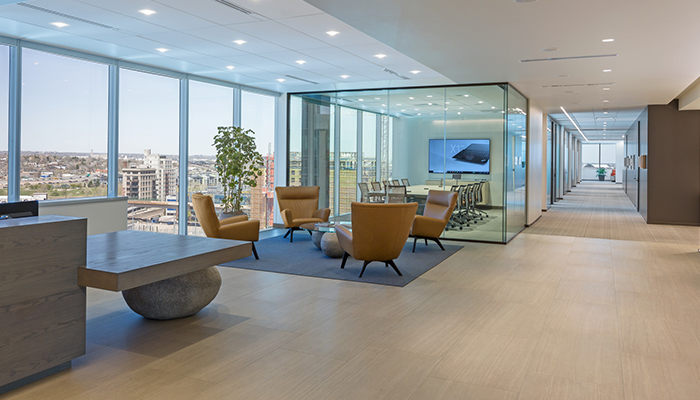 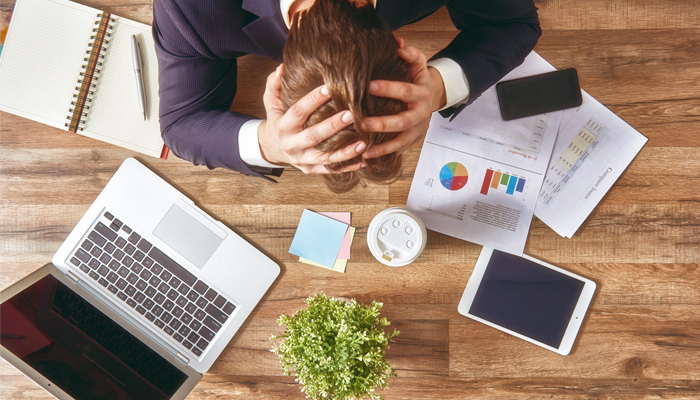 Move Over Stress: An Engaged Workplace is Set to Perform