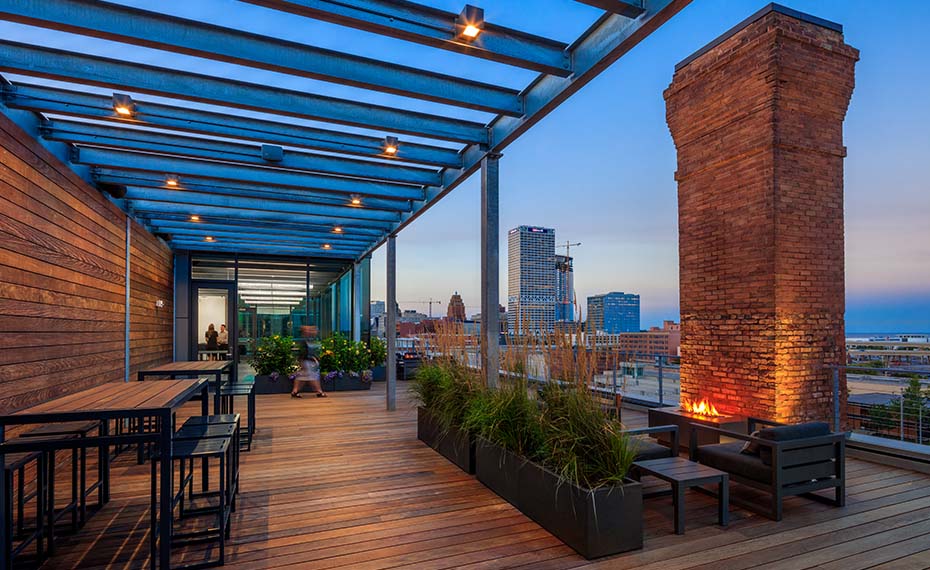 Although the Historic Third Ward is known for its unique restaurants, chic boutiques and engaging cultural events, it is also the home of some of Milwaukee's leading businesses.

Eppstein Uhen Architects and Physicians Realty Trust are just two of the noteworthy firms that are headquartered here. Now, as companies are reopening their spaces and recharging operations, a Third Ward location is proving to be an asset for attracting and retaining top talent.

Founded 114 years ago, Eppstein Uhen moved to the Third Ward in 1998, when the company purchased the building at 333 E. Chicago St. Its clients include Fiserv Forum and the Deer District, Froedtert Health, the Marriott Tribute Hotel and the new Komatsu Mining Corp. headquarters.

"We saw the potential of the Third Ward early on, as we lived, worked and experienced the area," explains CEO Rich Tennessen. Proximity to Milwaukee's downtown was also an important factor in the decision to buy the building. He notes that transit, access to parking, bikes and walkability make the Third Ward accessible to all parts of the city. Staff members can also walk to Summerfest and the city's summer festivities.

Kristin Dufek, the firm's president, appreciates the walkability, not just as she heads out to client meetings, but to grab a quick bite at the Milwaukee Public Market or enjoy lunch at a nearby café. But her favorite spot in the Third Ward is "the sixth floor space. I go up there and look at the Hoan all lit up and just look at the city and see what the city has to offer," she says.

About 140 of the firm's 200 employees work at Eppstein Uhen's Third Ward headquarters (the others work at offices in Madison and Denver.) HR Director Bob Norman says location "absolutely is a factor" in hiring and retention: "For people from Milwaukee and Wisconsin, they are familiar with the Third Ward and excited about being in it. For those who are coming to Milwaukee, they love the neighborhood and often move to the Third Ward."

Loving the neighborhood is likely one of the factors in Eppstein Uhen being named one of the area's 'Top Work Places' by the Milwaukee Journal Sentinel for nine consecutive years.