Why the Milwaukee Bucks' new arena is the NBA's most impressive 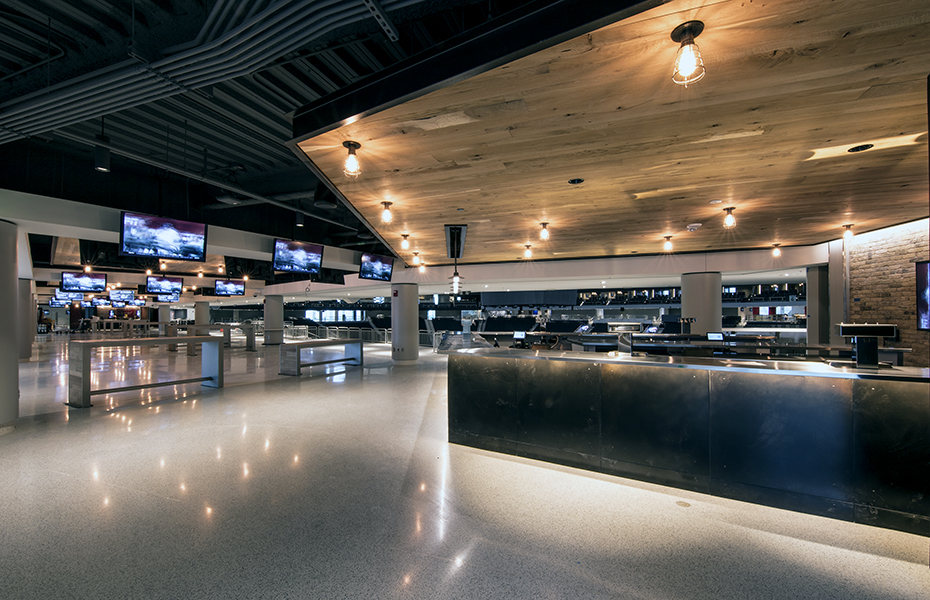 There’s a phrase Peter Feigin keeps using as he talks about Fiserv Forum, the gleaming new arena that will serve as the home of the Milwaukee Bucks starting this season: “Best in class.”

The Bucks broke ground in June 2016, 11 months after securing $250 million in public funding for the project, a contentious political process marked by threats of relocation if local and state officials didn’t approve the quarter-billion-dollar subsidy. And Feigin, the Bucks’ famously direct president, has spent the better part of the last two years obsessed with not only getting this building built, but with making it sing on arrival.

As the on-the-ground point person for the franchise’s New York-based primary owners, Feigin’s been tasked with leaping every logistical hurdle to get the gym open for this season. He’s also got to ensure that the new home of the Bucks — and Marquette men’s basketball, and touring acts ranging from Justin Timberlake to Kevin Hart to the UFC — isn’t just impressive for a mid-sized market, but rather one as awesome and alluring as anything the league’s glamour franchises can offer.

And so: “Best in class,” again and again, in everything from snacks to seats to sightlines to … the welcome mat?

“One of the things you want to do is make it beyond welcoming,” Feigin told Yahoo Sports during a recent trip to New York. “So when you walk toward this entrance, there is no surprise. We are going to make the largest welcome mat in the world — literally — to accentuate the fact that this is such a welcoming place.”

In the grand scheme of a $524 million arena that sits at the center of a massive 30-acre downtown district — one that the Bucks claim will kickstart economic development in the heart of the city, though some researchers and critics have disputed that — a little thing like a welcome mat doesn’t seem like such a big deal. But for an organization intent on maximizing the possibilities afforded by the transcendent talent of Giannis Antetokounmpo, on casting aside a middling recent past in favor of a sustainably competitive future, and on turning themselves into an entertainment destination for fans from all over the Midwest, there really aren’t any little things. So you might as well make them big.

Like, say, a 92-feet-by-24-feet place to wipe your feet. (The Bucks are “working on setting a world record” with it, according to a team spokesman.)

The message is clear: from the second you get within sight of Fiserv Forum, the Bucks want you to feel both like you’re entering the future and that you’re right at home. (“It’s a tough needle to thread, but the people help it a lot, because it’s about the nicest place in the history of the world,” Feigin said.)

They’re convinced that if they can get you to the front door of the NBA’s newest attraction — whether for a ribbon-cutting ceremony and open house on Sunday, or for a grand-opening concert featuring The Killers and hometown heroes Violent Femmes on Sept. 4, or for the Bucks’ home opener against the Indiana Pacers on Oct. 19 — you’ll want to stick around.

“And then you’ll see all the great enhancements of what a best-in-class arena would have,” Feigin said.

“From the main concourse, from the upper concourse, if you go out and get some food and [drinks], if you want to stand on a drink rail, if you want to go navigate the bathrooms, you’re still in the game,” Feigin said. “Portions of arenas and stadiums have this, but really, this physically is where the entire arena is an open concourse. … This is completely transparent. This is completely glass walls. If you can see an area, anywhere, you can navigate and get to it.”

Feigin said the Bucks knew that going too futuristic wouldn’t work, though; a “glass spaceship” wouldn’t quite connote the “authenticity” or “localism” they were going for. So they pushed arena designer Populous to come up with a homespun finishing touch … and they came back with the “beer barrel” exterior. Or, if you want to get technical, “a zinc-patina shell on the outside of the arena,” as Feigin describes it.

“It is this awesome, sloping, kind of ripple effect of, like, a wave, that goes on […] we love that effect,” he said.

The Bucks’ research and development process included visits to scores of stadiums, including three of the NBA’s newest arenas: Golden 1 Center in Sacramento, Barclays Center in Brooklyn and Amway Center in Orlando. Feigin’s confident that there isn’t a building in the league that can offer the everything-at-once vibe fans will get when they’re standing in the wide-open Fiserv Forum.

“When I stand on the main concourse, about 24 rows up, and [I’m] basically standing at, like, the greatest visual and sightline location, and I’m in the middle of food and beverage, and I’m at a harvest table … I just love that feel,” he said. “It’s fascinating to me. I’m so excited to watch people engage and immerse themselves in how it works.”

“It’s that emotional, psychological connection,” Feigin said. “Like how people understand when they’re in a special place — when you’ve paid attention to details, and tried to embrace them. It differentiates. It makes people want to be a part of it.”

“We spent so much time on the shape, and how do you look, like, unobtrusive?” Feigin said. “Like, you don’t want to see these WiFi capsules just all over the place. Do you want to paint them out? We couldn’t do them under the seats, because it kills the sound and, like, what the reverb is. All these little ridiculous things to do it.”

Providing seamless service at the speed of thought — the Bucks claim their beefed-up network operates fast enough “to send 300,000 Snapchats per second” — is “essential to the customer experience” in 2018, Feigin said.

“It was really kind of [part of] the strategic planning of the entire 30 acres and district, because you know, your phone and your mobile [device] has to work outside the arena, too,” he said. “It’s a whole different world — just, the entire arena is on second-screen. Five years ago, it would be like, ‘Well, maybe our kids will be using that [while the game’s going on].’ Now, though, there’s no one not on their phone.”

And while the adults in the gym are on theirs, they’ll be able to order a beer straight to their seat — no matter where that seat is — by opening up the Bucks’ mobile app and tapping the new “Coors Light Beer Button.” That’s one of several new features in the team’s app, along with specifically tailored time- and location-based content for each user, and the ability to buy single-game tickets directly through Ticketmaster within the app.

To hear Feigin tell it, Fiserv Forum is all about aspiration. For the Bucks — a team that won more than 50 games only once, and advanced beyond the first round of the playoffs just twice in three decades in the Bradley Center — it represents their aspiration to become the kind of organization known for doing everything in a first-class manner.

In some parts of the process, the NBA takes the bat out of the builder’s hands, due to the sheer number of specific items that must be uniform from arena to arena: the sizes of medical treatment facilities, bench areas and photographers’ locations, the placement of the scorer’s table, the basket stanchions, shot clocks and court surfaces, the positions and heights of video cameras, and about a million other things. Outside of those non-negotiables, though, franchises have the opportunity to make choices — “enhancement decisions,” Feigin called them — in hopes of benefiting the basketball club, the bottom line or, ideally, both.

So when you build the locker room, film room and other areas where coaches and players will congregate, you give newly hired head coach Mike Budenholzer the chance to draw up how he wants them to look.

“The second he came on, it was building his classroom,” Feigin said. “It was very exacting. Like, it mattered where whiteboards are. It mattered where film sessions go. It was really structured, down to the detail. … Why certain windows should be clouded, because we don’t want distractions in the room. Where the projection is, how to change the sightline of where players are watching video, because this is the way halftime works. All of it made, like, simple, great sense.”

You give the face of the franchise the chance to weigh in, too.

“[Giannis is] very involved, because he thinks it’s fun, and he wants to be a big part of it,” Feigin said.

From the sound of it, though, he had fewer notes than Coach Bud.

“Giannis asks for nothing,” Feigin said. “Giannis is a pretty simple guy. He is kind of surprised and delighted. He’s walked through the arena a few times, and sat in all the seats, and pretended to order food. Giannis is a pretty easygoing, fun-loving guy.”

Beyond the court, Fiserv Forum also represents ownership’s aspiration to turn the Bucks into an anchor, a cornerstone, a destination for anyone looking to have a good time in Wisconsin.

“People currently do not come down to downtown Milwaukee for entertainment, for sports, for more than three hours at a time,” Feigin said. “So how do you change that paradigm? You’ve got to build it. You’ve got to encourage people. This is the next phase of, ‘How do you bring fans?’ Is it family-friendly? How do you have activities and time and places for people to hang out and cohabitate? … We really want to create, for lack of a better word, a neighborhood. A place where people want to be.”

They’re banking on the combination of overall team quality, a legitimate superstar, and a bunch of cool new stuff to help them get there. The early returns are reportedly promising. The Bucks say they’re on pace to sell more than 10,000 full season tickets for Year 1, including more than 2,700 to new customers. Now, though, the hard work starts.

“The key is not going to be getting people in, because people will want to see the shiny new penny. It’s all about retention,” Feigin said. “It’s all about, ‘I want that experience again, whether they win or lose.’ So for us, it’s all the details. It’s all the people. Just to kind of create that atmosphere and that environment [of] almost something for everyone.

“If you’re into incredible [audiovisual presentation], you know, graphic illustration — great, it’s your place. If you’re into authentic, great, localized food? Bang, you’ve got it. Great. Here you go. If you want to sit at a pub? Bang, you’ve got it. You want to feel welcome, you want to feel comfortable and kind of excited. So that’s kind of the magic potion that we’re trying to put together.”