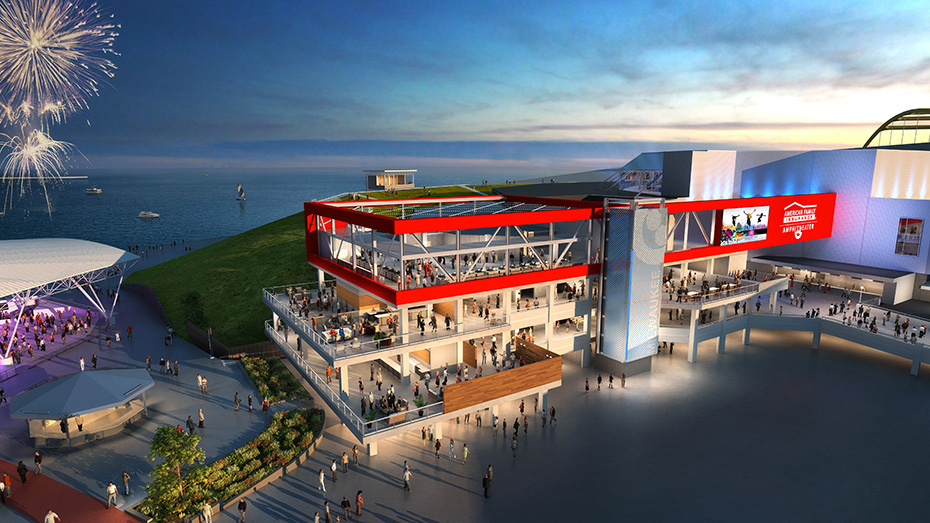 Today, Summerfest officials released renderings of the new $50 million American Family Insurance Amphitheater construction project, which will be built across a two-year period.

Although it will be ready in time for 2019's Big Gig – the first headliner of which was also announced Wednesday morning – a grand opening ceremony for the new amp will take place alongside Summerfest 2020.

"It's just a continuation of the development of the entire park," said Summerfest President and CEO Don Smiley at the unveiling at Summerfest headquarters, just outside the south end of the Henry Maier Festival Park, in the Third Ward.

"It's really been the responsibility of the board and management to redevelop this park, north and south and everywhere in between. We've done that. The proof is in the pudding. It's all right there to see. We started on the south end and went to north end and now, we're back on the south end.

"I think it's just important that fans know that we're really trying to improve the property and the festival on a year to year basis and make it, not just the world's largest music festival, which is a distinction in and of itself, but really the best music festival, the best value and there's something for everyone here and they feel comfortable and stay here."

The new amp, designed by Milwaukee's Eppstein Uhen Architects (which was also involved in the design of the previous amp, completed in 1987), will make use of the current bowl, but in the first phase will raise part of the existing roof, including the stage roof to accommodate larger touring productions, replace the stage, backstage and production areas and the loading dock, which will be larger than its predecessor.

"That building really served us well for 31 years or so," Smiley said, "with just a tremendous amount of mega stars and international recording stars, and all of the fans and generations of people who have been touched by the music and the experience of Summerfest. But as you know, they don't last forever, so now is the time to get at it (and) really put our stamp of approval on it."

This first phase of construction on the new amp will allow Summerfest VP of Entertainment Bob Babisch and his staff to book performers who in the past might've skipped the Big Gig because the Amp couldn't accommodate their larger productions.

Seating capacity in the new amphitheater – which covers nearly 13 acres – will remain at about 23,000, the same as in the venue it replaces.

Demolition has been completed for this phase and site preparation work is ongoing.

After Summerfest 2019 wraps, work will begin on phase two of the project, which will offer patrons more concrete improvements they can experience first-hand, including improved sightlines, new hi-def video screens and digital displays, new fully accessible concourses and aisles (along with an elevator), new seating and row configurations, new food and beverage venues, and additional restrooms to alleviate the long lines that have become an Amp headache.

There will also be new VIP hospitality areas, including private outdoor areas offering views of the skyline, Lake Michigan and the adjacent BMO Harris Bank Pavilion stage, that will include bars, lounges and private restrooms.

This phase is slated for completion in time for Summerfest 2020.

"We continue to build upon the legacy established over the past 31 years," said Smiley, in a statement. "From Tina Turner to Kenny Chesney and The Rolling Stones, this building has hosted its share of legends. As a non-profit organization, it is critical we reinvest in this facility so that we can continue to attract top talent, ensuring Summerfest remains a driver of economic impact and tourism for Milwaukee."

Smiley said that the cost of the new amphitheater will not be laid atop future ticket prices.

"There's really no big huge ticket price increase to pay for all of this," he said. "We're creatively financing it on our own. The amphitheater (ticket is) actually a hard ticket, which does allow you entrance into Summerfest as well as the concert that you're going to see, and that ticket price varies depending on the artist – they decide, basically. A Rolling Stones ticket is going to be Y and another artist is going to be X.

"You really can't go anywhere, whether it's ... the Essence Festival or Lollapalooza or any one of the other multitude of music festivals around the country, you can't just pay that type of ticket price and see all the bands Bob (Babisch) and Scott (Ziel) and Vic (Thomas) sign for our venue."