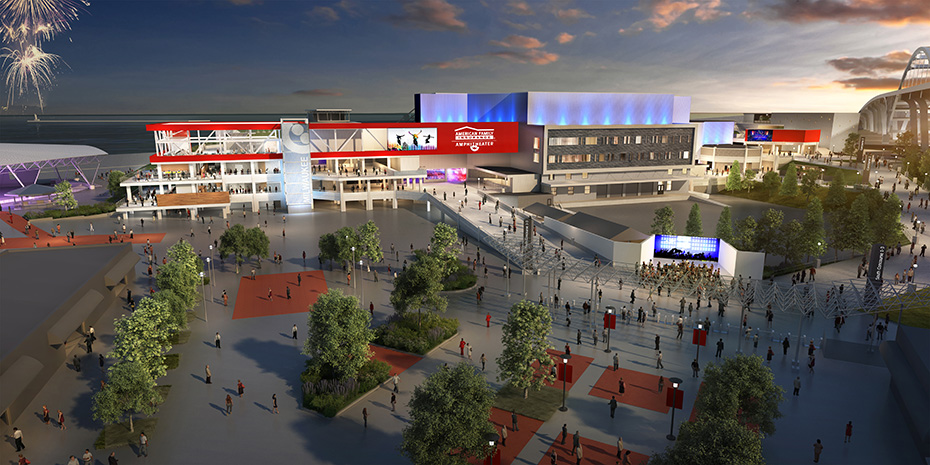 The Big Gig's biggest stage is getting a massive makeover.

Summerfest officials unveiled renderings and details Wednesday for its new $50 million American Family Insurance Amphitheater. The venue is set to open in time for the festival's 2020 edition.

On the bill: VIP areas with dramatic city and Lake Michigan views; more food and drink vendors; and bigger, and better sounding, concerts.

"It's going to enhance our visibility as a major festival in the world," said Bob Babisch, Summerfest's longtime vice president of entertainment and talent buyer.

Designed by local firm Eppstein Uhen Architects, with Hunzinger Construction Co. overseeing the project, the new amphitheater will be constructed in two phases.

The first phase, underway now and to be completed before next year's Summerfest, includes an expansion of the backstage area, including 19 dressing rooms, seven loading docks and more catering facilities.

A key component: The roof will be raised to 65 feet, the standard roof clearance for stadium concerts. Only a couple of amphitheaters in the country have roofs that high, Babisch said.

"We've lost shows before because we didn't have 60 feet of clearance. Last year, we lost one," Babisch said. "We can give (tours) the ability of putting a stadium-sized show in the building, without having those costs associated with putting up a stadium-sized show."

That's because those tours will be able to use the amphitheater's stage instead of constructing one, but they'll also have the capability of taking the stage out and installing their own if that's preferred, Babisch said.

But the most dramatic changes will occur after Summerfest next year, to be unveiled before the Big Gig in 2020.

Phase two includes private VIP areas with bars and lounge seats that will offer views of the Summerfest grounds, Lake Michigan and downtown skyline, and new food and beverage vendors, including some with seating areas that will have direct views of the stage.

There'll be additional concourses, restrooms and video screens and digital displays throughout the 12.5-acre site. The seating bowl will be redone to enhance sight lines, and add new aisles and wider pathways for easier in-and-out access. There'll also be an elevator and new access points for concertgoers using ADA seats.

Even with all the changes, the seating capacity will still be about 23,000, Babisch said, and the steep seating layout compared to most venues its size will be retained.

"The first thing when we sat down with consultants, especially audio consultants, is making sure we don't lose that vibe, of feeling (from the stage) that everybody's right on top of you," Babisch said. He's credited that layout for locking in impressive gets in the past, like the Rolling Stones three years ago.

Part of a massive redo

The new amphitheater is a key part of a 10-year title sponsorship deal announced in January 2017 with Madison-based American Family Insurance. Financial details were not disclosed.

The new amphitheater — which replaces the current venue, which opened as the Marcus Amphitheater in 1987 — is the most significant development following about seven years of drastic changes at Maier Festival Park.

More than $65 million in capital expenditures have been spent on ground improvements, including for a new stage, the BMO Harris Pavilion, that premiered in 2012. Also, there have been redesigned entrances and built-from-scratch remakes of the U.S. Cellular Connection Stage, the Miller Lite Oasis and the Briggs & Stratton Big Backyard.

The Uline Warehouse is also being rebuilt, and will be ready for Summerfest this year.

All of those projects, like the new amphitheater, were designed by Eppstein Uhen and financed with private money.

The 51-year-old Summerfest prides itself on being the world's largest music festival, bringing more than 800 bands and at least 700,000 fans to the Milwaukee lakefront each year.

But the festival landscape has become increasingly competitive across North America. And in Milwaukee, there's a new player in town, the Milwaukee Bucks' $524 million Fiserv Forum, that has been loading up its calendar with major shows.

But while the number of large-scale shows in Milwaukee is booming, Milwaukee is one of the slowest-growing large cities in the country, according to a study last month by WalletHub. And Summerfest reported its lowest attendance in at least a quarter-century this year.

"Had we not done this, I think we would have fallen behind and not been an attractive venue for bands to come and visit and play," Smiley said. "It wouldn't be up to the expectations that Summerfest fans have learned to expect over the years."

Babisch on Wednesday announced the first Summerfest show for the American Family Insurance Amphitheater for 2019, with country star Jason Aldean and opener Kane Brown, will happen June 28. Summerfest will return June 26 to 30 and July 2 to 7.