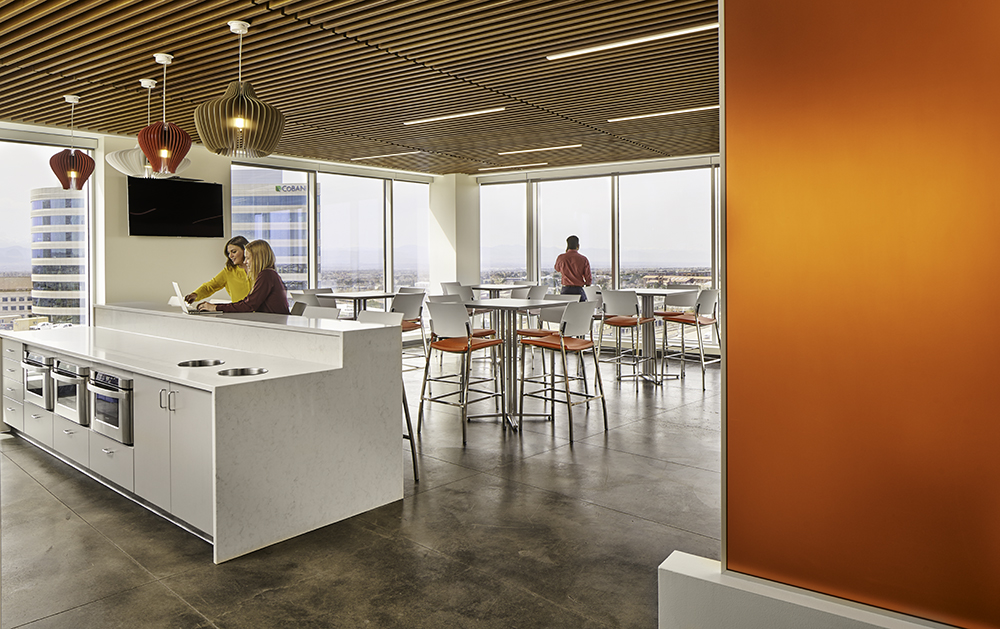 Clairvoyance is the ability to perceive things in the future beyond normal sensory contact. Such a skill would be an asset in commercial real estate development, where intuition must be carefully balanced by the analysis of a broad range of conditions, challenge, and constraints reaching far beyond the capacity of mere instinct. For savvy, multigenerational real estate developer Shea Properties, reading the tea leaves is hardly mysticism, but rather a collective pursuit toward big ambitions in which placing trust in others is a wise investment. By engaging an expert team of designers, builders and investment partners, Shea’s long-term vision for Village Center Station in the heart of Greenwood Village has finally come to full fruition.

“Master planning Village Center Station and delivering the final of three buildings culminates an 11-year pursuit,” says Brit Probst, a partner with Davis Partnership Architects who, along with project manager, Fred Pax, has been at the helm of design since the start. Shea Properties owned the undeveloped, 13.5-acre parcel directly abutting Interstate 25 for more than 20 years waiting for the light-rail line to arrive before they approached Davis Partnership in 2007 to explore ways to maximize the site’s tremendous potential. Located on the external arch of Fiddler’s Green Circle, just steps from the Arapahoe Light Rail Station, the earliest design objective for the parcel was to enrich the pedestrian experience between Fiddler’s Green Amphitheater, the light-rail station, and surrounding commercial district. Peter Culshaw, executive vice president of Shea Properties, invested in a West Coast tour of Silicon Valley tech campuses to investigate new thinking on innovative workplace strategies.

“We toured Google, Apple and Facebook and immediately noticed outdoor spaces connecting campuses were far more informed and interactive, energized by the new millennium,” says Culshaw. Just as designers across all spectrums of commercial development are realizing the increased need for a range of opportunities for flexibility and movement throughout the day in indoor spaces, outdoor spaces are also being conceived as multi-dimensional amenities. The plaza at Village Center Station stretches the length of the site connecting the three buildings and anticipates meeting a variety of programmatic ambitions beyond pedestrian passage and simple workday respite including outdoor learning, community events, farmer’s markets, and vendor fairs.

While the plaza binds VCS’ three district properties together as a common experience at the ground level, it is the beautiful, undulating symmetry across the three mid-rise office towers that makes the collection feel harmonious. Originally the three VCS buildings were planned to be delivered in the logical I, II and III sequence spreading from south to north away from the light-rail station up I-25. Markets, however, are never certain. VCS I opened in 2008 just as the recession began and leasing suffered through a lukewarm economy for the better part of five years before conditions were right for the site’s next addition. In 2011, Shea was engaged by CoBank, a national cooperative bank, to conduct a site selection process for its new headquarters offices. Critical analysis of the two available VCS parcels and several other comparable sites in the Tech Center revealed VCS III to be the bank’s preferred location. Delivering the buildings out of sequence while maximizing both the potential and profitability of the entire site, set the stage for a complex but highly rewarding process for all involved on the final building, VCS II, which launched as Spectrum Plaza when the doors opened in April.

“This building ties the other two together through a combination of materiality, shared design elements, and, of course, architectural heritage,” says Probst of the new building’s aesthetic qualities. As the center section unifying the set, Spectrum Plaza blends the use of precast concrete exteriors of VCS I and the abundance of glass used on VCS III to create a clear voice of its own. A serpentine wrapper across the face of the building provides a consistent north-south thread across the collection. The design establishes a strong interface between the building and the pedestrian realm through animated retail purposes and transparency on levels one and two. “Designing building’s III and II out of sequence was a minor hiccup in design, but certainly made construction more difficult,” continues Probst. “We really appreciate the strong partnership with general contractor Adolfson & Peterson Construction, who built both buildings and always strives to deliver great quality.”

In January 2014, Adolfson & Peterson Construction joined Shea Properties and Davis Partnership on the 11-story, 296,000-square-foot CoBank Building in a construction manager/general contractor role. AP helped that team establish cost-effective solutions and design-achievability during the preconstruction phase and then delivered the sleek, angular glass office tower on time and on budget during a severe skilled subcontractor shortage. After successfully applying lean construction strategies to deliver an uncompromised design while meeting their client’s challenging demands on the 296,00-sf, precast structure, AP cemented a continuing relationship on the Village Center Station team.

“I pushed AP to execute the fully finished plaza portion of the project on the second building,” says Culshaw, of a request that left his builder with an ultra-condensed site for the final office tower. CoBank Tower and Spectrum Plaza are both tailored to premium, long-term, ownership tenants, investing in signature office properties and the plaza linking the two buildings is an important part of what makes each special. Asking CoBank to wait for a promised amenity while the center tower was under construction really didn’t jibe with Culshaw’s development philosophy.

“We shape our buildings until they are activated, and they immediately begin to shape us. We have to give owners the full experience on Day One and we partner with designers and builders who appreciate the importance of making that happen.”

Delivering the 325,000-sf, 12 -story Spectrum Plaza as the new engineering headquarters for the second-largest cable provider in the United States between two newly occupied office buildings presented a series of logistical challenges for both designers and builders, but it was the tenant-owner’s changing building program that really put the team and their relationships to the test.

“The biggest preconstruction challenge here was uncertainty,” says Culshaw frankly as he assesses the trust and commitment he asked of both builders and designers before the final bidding documents were developed.

Spectrum Plaza started life on the boards at Davis Partnership as a nine-story office tower with an estimated tenant headcount of some 900 personnel. Propelled by the 2016 merger between Charter Communications, Time Warner Cable and Bright House Studios, Charter’s astounding growth continually increased their spatial needs as the design evolved. Charter also brought a continuing relationship with interior designers BurkettEUA, whose palette for the project is the culmination of a six-year relationship designing spaces in other Charter office spaces that are meant to foster serendipitous collisions. With the expanding building program stretching the original plans from nine to eleven to twelve stories in height during preconstruction, the project required an unusually high-level of confidence in the CM/GC process from all involved. “We signed a long-term lease before we even had core-shell design and final construction costs,” finishes Culshaw. “We challenged Davis Partnership not to over draw. We pushed AP to get us across the finish line. BurkettEUA represented the tenant’s vision for cohesion and comfort. We all trusted one another, took a leap of faith, and kept our word.”

Published in the June 2018 issue of Building Dialogue.