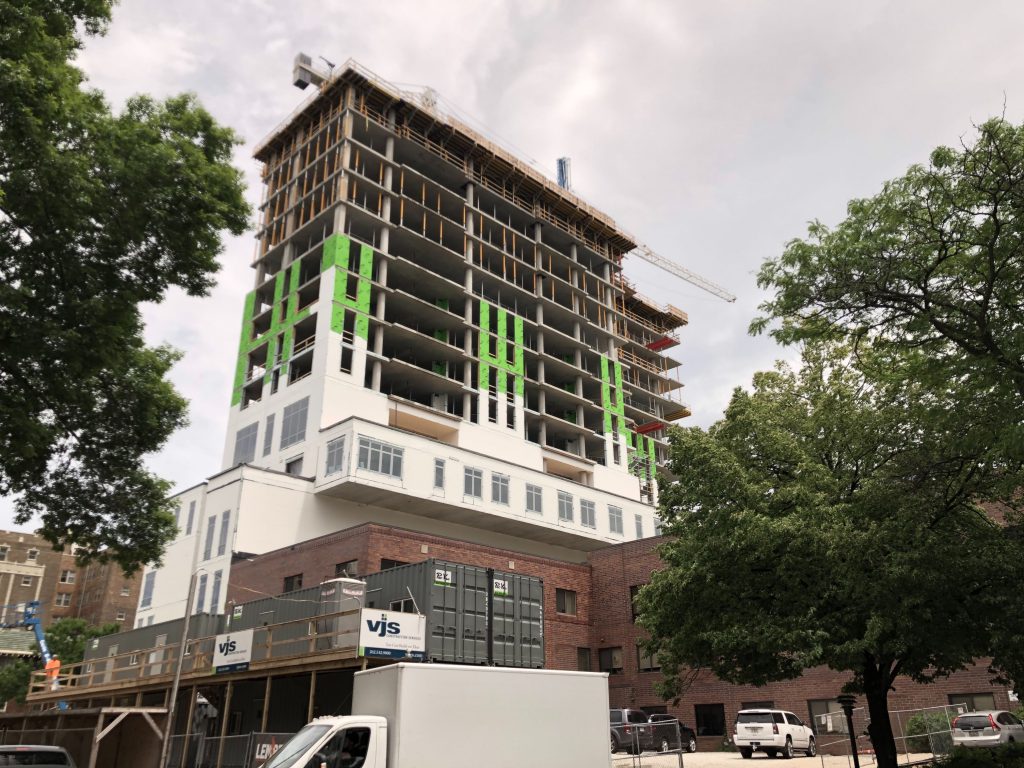 The 22-story, $123 million tower is rising at the southeast corner of the intersection of N. Prospect Ave. and E. Kane Pl. The non-profit provider of senior housing and licensed-care will link the tower with its existing campus, using it as a northern bookend to its ever-rising campus.

The new tower, to be known as North Tower, will join the former ten-story North Tower (now Central Tower, completed in 1979) and the 21-story South Tower (completed in 2011).

North Tower, which now rises over much of the neighborhood, replaces an employee parking lot and three-story building that provided skilled nursing and assisted living apartment units. The three-story building, built in 1979, replaced an apartment building known as the Benjamin Flats that itself replaced a mansion. Prospect Avenue is perhaps best recognized as an always evolving street, including back to its time as a Civil War camp.

The new building will include 79 independent living units, 16 catered living units, a lecture hall/performance space and two levels of below-grade parking. The tower’s lower floors and an attached four-story building will include the 50 skilled nursing beds and 24 assisted living apartments that will be lost from the demolition of the 1979 building.

Construction, which began with the unceremonious demolition of a small garden, began in January 2018. A ceremony was held in April 2018. The 422,000-square-foot complex is planned to be complete in spring 2020.

The tower complies with zoning regulations for the site and its approval did not require a lengthy approval process from the city.

Saint John’s has been located on the lake since 1979. For more on the organization’s history and why it’s pursuing a new tower, see columns by Michael Horne from January 2017 and January 2018.

If you’re looking to move in, the Saint John’s website boasts a number of floor plan options. But don’t wait, most of the units have already been reserved.