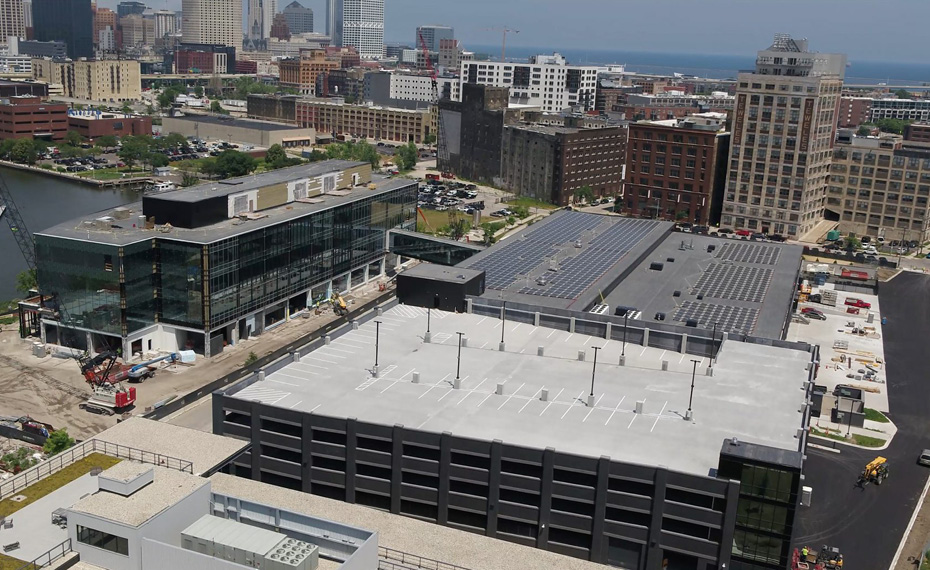 Warehouse equipment company Rite-Hite will welcome the first employees into its new headquarters later this month.

The company is developing a three-building complex in the Reed Street Yards business park, just south of Downtown, as part of a strategy to relocate from its suburban Brown Deer headquarters and consolidate other area offices. When completed in early 2023, it will be a home for 300 employees.

Just the first building, HQ South, is opening now. In a statement, the company said it will begin with 80 employees. The initial employees are coming from three facilities: the Brown Deer headquarters, the Brown Deer location of service division Arbon Equipment and an engineering office at 8397 N. 87th St. near the former Northridge Mall in Milwaukee.

The research and development building is a two-story, 108,552-square-foot office building, on the south side of W. Freshwater Way. It is the location for Rite-Hite’s highly-specialized technical training center for sales personnel and customers. The center includes a series of loading docks allowing the company to showcase its array of warehouse products, including 12 different loading dock levelers and dock restraints and 20 different industrial doors.

When the larger HQ North opens across the street, HQ South will be reduced to 65 employees.

Eppstein Uhen Architects is designing the buildings. CD Smith is leading the general contracting. The project was originally expected to be completed in early 2022.

The new Milwaukee campus would be used for research, design, administration, sales and management, but not manufacturing.

In late 2019 the Common Council approved a $4 million amendment to the tax incremental financing district used to create the Reed Street Yards business park to fund the relocation of two Milwaukee Metropolitan Sewerage District sewers that cross the park, but don’t directly serve the 15-acre site formed from a former rail yard and trucking facility. The move was billed as clearing an impediment to development and city officials said it would be required whether the then-rumored Rite Hite relocation occurred or not.

The formerly water-focused business park only attracted a single office tenant prior to Rite-Hite’s announcement. Zurn, then a subsidiary of Rexnord, relocated from Pennsylvania to a three-story office building in the business park.

The Yards apartment building was completed in 2020 on the district’s eastern edge along S. 2nd St. A substantial amount of other development, including the Global Water Center, has taken place just outside the borders of the business park.

An affiliate of Rite-Hite purchased 9.4 acres of land from General Capital Group for $12 million. The riverwalk segment that borders the property remains open during construction.