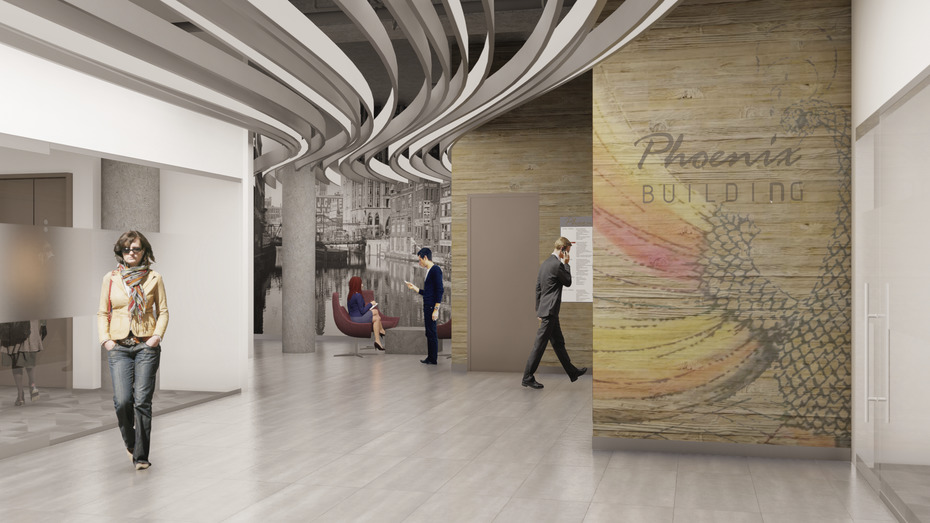 Black Swan currently operates the Riverwalk event space at 309 N. Water St. in the 3rd Ward. It is now building out space on two different floors of the Phoenix Building, at 219 N. Milwaukee St., in that same neighborhood.

An about 8,000-square-foot space on the building’s first floor is sized for weddings, and has its first event booked for June 8. Black Swan also leased 3,000 square feet on the building’s seventh floor, with large windows looking east toward downtown, Hoan Bridge and Lake Michigan.

“This location is booking faster than our first location in the 3rd Ward,” Shepherd said. “I didn’t anticipate that.”

Renovations for those new venues are underway. The work coincides with other rehab efforts being led by the Phoenix Building’s owners that are intended to attract more office professional tenants to the 1917 building’s upper floors.

The projects mark another step as the 120,000-square-foot building makes the same transition as others in Milwaukee’s 3rd Ward. The intent is to update the 100-year-old industrial building from low-rent offices and storage into loft-style spaces that are attractive to creative companies and workers, said Jim Swernoff, who acquired Phoenix in fall 2013 with his brother, Michael.

“There used to be a lot of fulfillment companies here; there still are one or two with warehouse stuff,” Jim Swernoff said. “This was a factory. It was built as a factory. It’s concrete and it’s got pillars and wood floors and a nice window wall.”

The building originally was the fourth plant built by Phoenix Hosiery Co. in the area. That history is where Shepherd got the name for the first floor event space: Plant No. 4. The seventh-floor space is called the Bianco Room, named after Monte Bianco near Italy’s border in the Alps, the highest point in Western Europe. That upper-floor space can cater to more corporate events, he said.

“It’s doubled, in terms of corporate clients, the emails we’ve been getting,” Shepherd said.

Black Swan will activate spaces that have been vacant or used for storage, and create another amenity for prospective office tenants, said Kevin Schmoldt, senior vice president of NAI MLG Commercial who represented Phoenix’s owners in the lease deal. The Plant No. 4 space will open off of the Phoenix Building’s lobby, which will get an extensive renovation in the coming months designed by nearby firm Eppstein Uhen Architects.

“What you do with your first floor affects the character of the office space above it,” Schmoldt said, “One of the key reasons we decided to do the Black Swan deal was we felt it was very accretive, very attractive and affects the rest of the building.”

This is the latest step of several years of renovation work, said Jack Jacobson, NAI MLG principal who is listing the office space. Some floors are already modernized for tenants such as Penrod Software LLC. Items that cluttered the basement were removed to create underground parking, and contractors have been going floor-by-floor updating shared amenities such as bathrooms.

More recently, the Phoenix Building was a contender to provide space for some of downtown's larger office prospects, including engineering firm Graef.

The lobby renovation will be done this summer. It includes adding a second elevator, and modernizing the building’s existing one. New lobby murals include one featuring the mythic bird in the Phoenix Hosiery logo. The front staircase will be relocated to make the building more accessible, and windows will be added facing the sidewalk.

“Every tenant we’ve signed up wants to know when we’re doing the lobby,” Jim Swernoff said. “We have to do this for our tenant population and we think it will bring in a lot more people.”