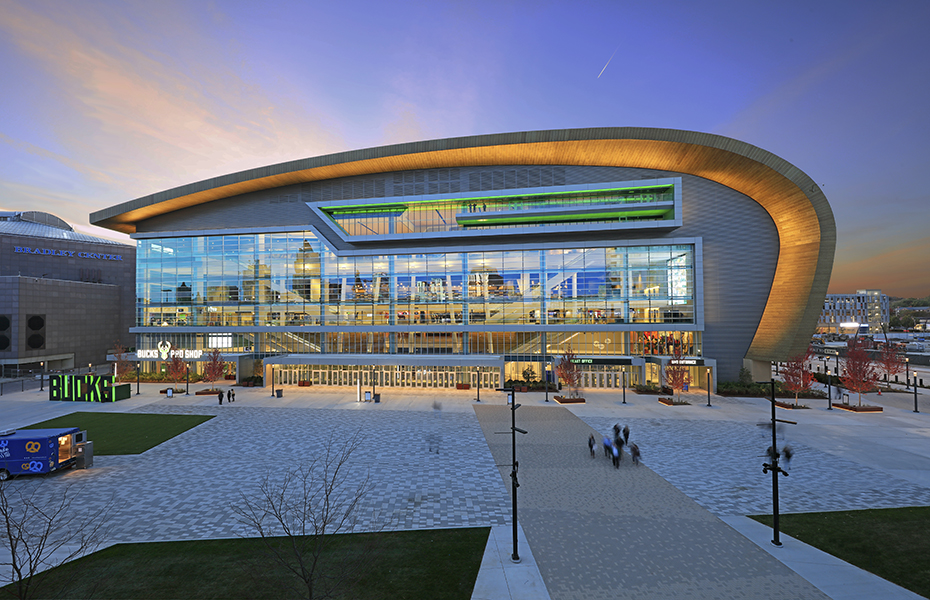 Those are the words used by Mike Sorge of Mortenson in Brookfield to describe Fiserv Forum, the new arena of the Milwaukee Bucks and Marquette University men’s basketball team.

Mortenson served as general contractor on the $477 million, 730,000-square-foot project, where these days full-house crowds enthusiastically cheer on the Bucks as they continue their playoff run as well as big-name music acts that shake its rafters.

The arena was named Project of the Year at the Milwaukee Business Journal's 2019 Real Estate Awards held at The Pfister Hotel in downtown Milwaukee. You can watch a video from the awards ceremony below.

“Even the workers were excited about it,” Sorge said. “As you’re working, you felt connected to whatever was going on in that building. You weren’t disconnected. You could always see it, you could always hear it. There was always a connection much like the fan experience of today because of the openness of it.”

Designed by lead architect Populous, Fiserv Forum is widely viewed as the standard for future sports arenas around the globe. With a seating capacity of 17,341 for basketball games and 18,000 for concerts, the arena features 34 suites, about 1,400 club seats, 850 televisions and a four-sided scoreboard that is the largest center-hung scoreboard with equal-sized, four-sided dimensions in the NBA.

“It was paramount to get it right and to get it as not only an aesthetic centerpiece, but the structural centerpiece and that worked really well,” said Milwaukee Bucks president Peter Feigin.

“People have the response we had hoped. They appreciated attention to detail, they really appreciate the finishes. Ownership, to begin with, really wanted to create this as the most welcoming place possible and designed it in a way that isn’t designed like any other arena or stadium, and (with) full transparency. We wanted the welcome mat open to the state of Wisconsin.”

The construction project took a little more than 24 months and nearly 2 million work hours to complete, but Fiserv Forum was built on time and under budget. About 4,000 craft workers helped build the new arena, a majority of them from the city of Milwaukee, a true accomplishment for the project, Sorge said.

“Everybody took so much pride in the construction of this building,” he said. “They wanted to be there. When you’re building it in your backyard, in your community, there’s a higher ownership of what you’re doing.”

The new arena also is a nominee for Sports Business Journal’s Venue of the Year.

Managing such a project was not an easy task. Realizing the vision for the arena on time and on budget was a true testament to the level of communication and collaboration done by everyone involved on the project, Feigin said.

“What you really have to be prepared for is solution thinking,” he said. “In a project this big, 750,000 square feet of public space, everybody has to be on the same page to really be able to pivot and solve things because something is going to come up every day that you’ll have to consider, think about and decide on.”

“A big part of the success was we really made decisions in real time, kind of on the ground, because we had so much attention on the day-to-day in the project,” Feigin added. “Sometimes, it’s a little different and there’s delay in decision making. We focused on real time decisions. We didn’t have any time to waste. That kind of helped us. We had to get this built in under two years. That was a nice motivation to keep going at warp speed.”

In its short lifespan, the new arena became a significant player in Milwaukee winning the Democratic National Convention for 2020. Feigin said the organization is looking to secure other large events, such as NCAA regional and championship tournaments and the NBA All-Star game.

“It’s a global advertisement for the city of Milwaukee and the state,” he said. “We’re real focused on taking advantage of this opportunity.”

Fiserv Forum also is regarded as the smartest arena on the globe, with technologies like retina scanning to access locker rooms, cloud-based software systems that power sales transactions and time cards for employees and a video production system that may be the first of its kind in North America.

“This is the example,” Feigin said. “Our owners were very adamant about creating the world’s greatest arena ... the proof is we’ve had hundreds of visits by arena and stadium operators who are either building or renovating for that next idea of where the future is going.”