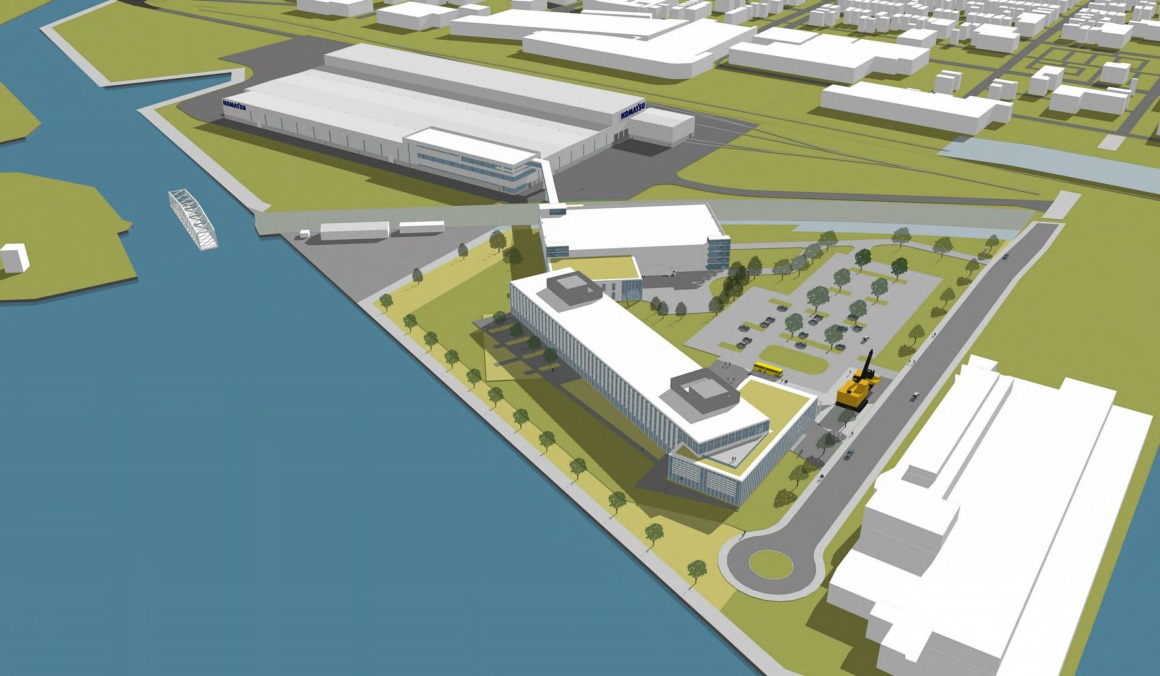 The City Plan Commission will review design plans next week for a three-story, 176,000-square-foot office building, training center, museum and two-story automation lab as well as a 430,000-square-foot, three-story manufacturing facility. Both buildings would be built along E. Greenfield Ave. on 58.5-acre site near the Inner Harbor.

Eppstein Uhen Architects and engineering firm GRAEF are leading the design of the campus.

The two buildings would be linked via a skywalk that spans the Union Pacific railroad tracks that bisect the site. A five-level parking structure with approximately 700 stalls would be built between the two facilities. A surface parking lot with 251 spaces would be built along E. Greenfield Ave.

The manufacturing facility, addressed as 311 E. Greenfield Ave., would be built parallel to the Canadian Pacific railroad tracks that form the site’s western border. Designs of the plant include rail lines directly into the building, similar to the company’s current campus on W. National Ave.

Another design element borrowed from the West Milwaukee plant would be the branding. Large Komatsu signs are envisioned to face the harbor and E. Greenfield Ave. A P&H-branded electric mining shovel, the company’s flagship product, would be placed along the street. The shovel on display today in West Milwaukee, while larger than anything one would expect to see in Milwaukee, is actually smaller than the large shovels the company makes currently that must be assembled on site at mines. The largest shovels weigh over three million pounds and can lift 120 tons at a time.

A 46,200-square-foot addition to the south end of the office building is also envisioned, as well as a 27,600-square-foot penthouse. The parking structure could also be expanded.

Because the project site is located within a previously established Development Incentive Zone (DIZ), the design review decisions of the City Plan Commission are final. A recent change to city policy that would grant the Common Council final oversight does not apply to the pre-existing zone.

Council members Robert Bauman and Nik Kovac, as part of approving the city’s land sale and subsidy for the deal in December, expressed displeasure with the use of city land to generate only 11 jobs per acre, while noting the Harbor District Water and Land Use Plan called for nearly twice that. “The reason there are so few jobs per acre here is because they have sprawling, suburban-style plans,” said Kovac. “Anyone who is pro jobs should vote against this deal,” said Bauman.

Both Department of City Development Commissioner Rocky Marcoux and Komatsu surface mining president John Koetz have characterized the deal as the largest urban manufacturing proposal in the United States. “Most companies that are expanding choose the easy route. They go into suburbs and plow up a cornfield,” said Marcoux about the proposal in December.

In addition to the site plan, the commission will consider nine deviations the company is proposing to make from the council-adopted DIZ design standards, including setbacks, garage door location, the number of windows in the manufacturing building and the number of parking stalls.

One thing the commissioners will want to seek clarity on is exactly how large the office building is. A narrative submitted to the city lists the building as having both 176,000 and 185,000 square feet of space. In the project narrative, the manufacturing building also varies in size from 430,000 to 450,000 square feet.

Details on the energy efficiency of the campus, a highly touted component when the project was unveiled, are not available from the design submissions. The narrative submitted to the city said the plant would be Leadership in Energy and Environmental Design (LEED) certified. The LEED program awards points and a total level based on a host of factors, from bike racks and transit access to material choice and reuse.

Compared to the West Milwaukee campus, the new facility is expected to use 75 percent less electricity and 80 percent less water, said company representatives in September 2018.

The company intends to use solar panels, wind spires, a closed-loop heat treat system, LED lighting and other sustainability solutions. “Our plan for this project is near zero emissions,” said Komatsu representative Matt Beaudry.

The development site is formed by the combination of the 46-acre Solvay Coke site, now owned by We Energies, and a 13-acre, city-owned site long used for coal storage. A substantial amount of water frontage is included along the Inner Harbor and Kinnickinnic River.

In an unusual move, the city would retain ownership of the riverwalk and a 45-foot-wide strip of land underneath it on the site. We Energies will retain ownership of the waterfront portion of its property as well, which is designed to insulate Komatsu for liability involved in environmental cleanup and allow We Energies to proceed with that work in the future. The city will entirely fund the construction of the riverwalk, approximately 4,300 linear feet, over both sites.

The Department of City Development and Port Milwaukee have a number of aspirational goals for the land left over from the development. As part of the deal, the city will get a purchase option on the .79 acre site owned by We Energies located on the north side of E. Greenfield Ave. for use as a future commuter rail station. The utility had acquired the small, triangular lot as part of its acquisition of the larger site to the south.

Port Milwaukee, the city-owned port, is also looking at developing a cruise ship terminal along the riverwalk. One ship docked in Milwaukee last year in the middle of its journey, but that number will increase dramatically in 2019 as part of the port’s vision is to become a destination for the more lucrative start or end of trips by vessels. It previously received leasing revenue from the city-owned site proposed to be sold to Komatsu.

The $285 million proposal is not without substantial public subsidy.

The state will provide $59.5 million in tax credits, tied to the creation of new jobs and other performance metrics.

The city’s financing is substantially more complex. The city will create a large tax-incremental financing (TIF) district, that includes $15 million in bonding for a new riverwalk segment. An additional $13 million to $25 million will be awarded to Komatsu over the 25-year life of the TIF district should the company maintain between 946 and 1,300 employees at the campus.

The company and West Milwaukee have yet to announce plans for what will happen with its former campus near Miller Park.

The company previously announced it hopes to relocate to the site in 2022.