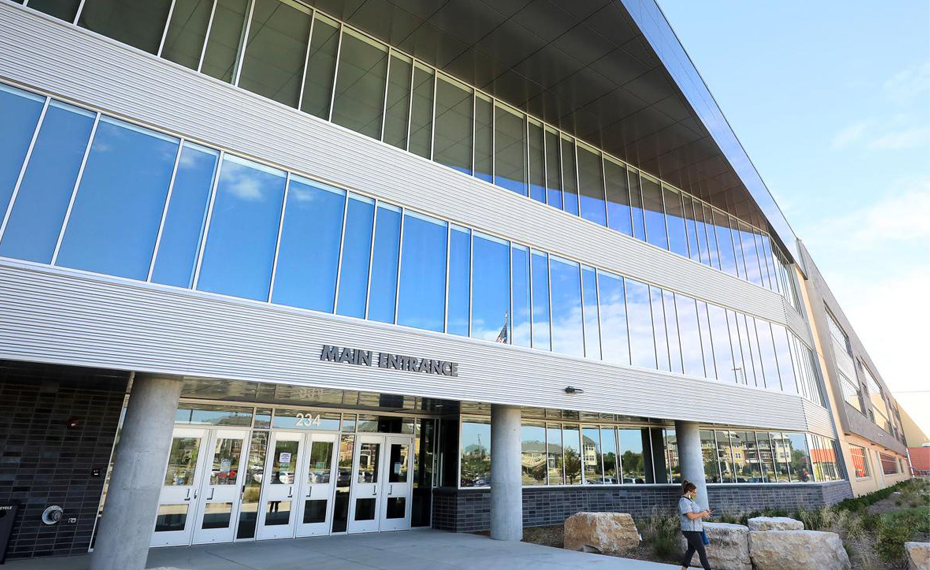 VERONA — A cathedral-height atrium will bathe students in sunlight as they eat lunch, small conference rooms attached to classrooms and the large “social stairs” are designed to promote collaboration, and floor-to-ceiling windows in the library pull a view of the rolling countryside inside the new $150 million Verona High School.

After two years of construction — and more years of preparation and anticipation — the project to transform farm fields on the edge of the growing city into a modern high school is complete.

But the 3,000 truckloads of concrete, 1.3 million cubic yards of soil moved to grade, and 283,734 bricks that went into the end product won’t be fully appreciated by the 1,650 high school students — at least for now — as the COVID-19 pandemic forces classes online and disrupts a grand opening.

“The idea that learning can only take place in the classroom, and we’re all going to face forward, the teacher’s going to deliver the content, and we’re going to sit in straight rows ... we’re not trying to replicate that model,” Principal Pamela Hammen said of the new school. “We’re trying to create a model where we are supporting students.”

The new high school was built with the goal of providing more physical space for all grade levels in the suburban Verona School District, resulting in several charter schools, an elementary school and middle school shifting homes among the existing district buildings.

It’s the product of a $181.3 million referendum voters overwhelmingly approved more than three years ago — at the time one of the most expensive school referendums in the state.

The 592,000-square-foot building occupies a seven-acre footprint on a 162-acre parcel just southeast of where Highway 18-151, West Verona Road and Epic Lane meet. Parking lots and new athletic facilities, such as turf football and soccer fields, baseball and softball diamonds, and tennis courts, surround the building.

“We hope that when you walk in there you’ll think, ‘I’m not sure I’ve seen a high school like this before,’” said Superintendent Dean Gorrell, who delayed retirement by a year to usher in the new building, only to see the public health crisis force most students to start the school year online on Sept. 8.

It’s just not the newness of the school that excites Hammen, but it’s the learning opportunities the space creates — from an expanded automotive repair shop to a room specifically designed for training students to become certified nursing assistants.

“We weren’t able to have the ribbon-cutting ceremony,” she said. “All the community and family tours that we had planned have been postponed. That is a disappointment, but at the same time this too shall pass. We are anxiously but excitedly going to be here and waiting for our students to be able to join us.”

There are polished concrete floors and unfinished concrete support beams in the hallways; brightly colored metal panels are affixed to the outside; and large exterior- and interior-facing windows draw in abundant natural light — one of the most important elements staff and students wanted, Hammen said.

Wooden accents on the side of staircases and around display cases came from trees cut down on the site and made into timber boards, including white oak, red oak, hickory, walnut, elm and cherry trees, said Aaron Zutz, project manager with contractor J.H. Findorff and Son, the construction manager for the high school.

Perhaps the most striking space in the school runs the length of two football fields through the center of the building.

A large atrium features three-story-high ceilings lined with windows at the top. Throughout the ground floor and a second-floor balcony of the atrium, restaurant-style booths, high-top tables and conventional dining tables offer spots for 1,000 students to eat at one time, and nine lunch lines will provide a variety of food options. Three “bridges” on the upper floors divide up the expansive space.

The space acts as the backbone of the school as most instructional spaces ring the atrium.

Classrooms for core subjects like English, math and science line the hallways of the second and third floors around the atrium. Some have windows looking outside, and others provide views looking down into the atrium.

In the classrooms, there are no rows of stale wooden desks. Instead, each room has brightly colored seating of three styles — regular chairs, barstool-height chairs and “comfy furniture,” such as sofas — to accommodate student preference, Hammen said.

Most tables are on wheels or can easily be stacked to open up the floor space and quickly reconfigure the layout of a room.

“We would expect the room setup within a class period would change multiple times within one period depending on the learning objective,” Hammen said.

Four administrative satellite offices are located on the second and third floors so students can more readily meet with social workers, counselors and psychologists.

By the fieldhouse, the school’s “social stairs” — over-size steps with built-in electrical outlets made for gathering and sitting rather than walking up — runs both inside and outside the school, and other informal meeting spaces “embedded” in the building are meant to promote student collaboration, Hammen said.

“The school to me feels much more like a college campus in that there’s these opportunities to collaborate, which also supports our efforts for personalized learning,” she said.

The new high school has a capacity of 2,200 students, or about 500 more students than the current high school enrollment. It was constructed to support a future addition that would expand capacity to 2,500 students.

The former high school had a capacity of about 1,300 students.

Noah Roberts, the Verona School Board president and a 2015 district graduate, said overcrowding was “very obvious” at the former high school.

“This new building clearly addresses the need for larger spaces and flexibility in learning environments that were not available at the previous high school with the number of students that attended,” he said.

Most of the work is done, but a few finishing touches remain, such as setting up all the equipment in a culinary teaching kitchen and installing way-finding signs.

Construction started in April 2018 and largely finished in June. At the height of the project, Zutz said there were about 350 workers on site each day and close to 100 contractors worked on the project.

The site was already winding down in mid-March when COVID-19 started spreading across the country, Zutz said, so workers didn’t have difficulty keeping their distance in the expansive space.

Classrooms for art, music, agriculture, technical education and business are clustered together throughout the first floor. In the tech ed wing, there are three shops for woodworking, metalworking and automotive repair.

The automotive shop has three lifts and a car alignment rack spread across four bay doors, and eight cars can fit into the room at one time. This compares with a single bay door for the auto shop at the old high school.

A commercial-style kitchen for students with restaurant-quality appliances and equipment will help prepare students interested in going into culinary programs after graduation.

For student athletes, a large weight room includes dumbbells personalized with the Verona Wildcats logo stamped on the ends, and an 800-person, mezzanine-style spectator area overlooks the competition swimming pool.

The school also has a second eight-lane, “warm water” pool that the public will be able to use. It’s one of several elements of the project funded by $12 million the district received from the closeout of a special taxing district around the campus of nearby medical records giant Epic Systems Corp.

When voters passed the referendum in 2017, it wasn’t just to construct a state-of-the-art high school and athletic facilities, but also to let the district shuffle around what buildings schools are in and renovate them in anticipation of growth.

In 2018, a consultant projected the Verona School District, which covers the town and city of Verona, parts of Fitchburg and Madison, and the towns of Middleton, Montrose and Springdale, would increase by 1,441 students by 2030.

Gorrell described the rearranging of schools — and putting in $17.8 million worth of renovations across the district — as a “follow the bouncing ball kind of thing.”
The former high school, which consisted of a main building and another building called the “K-wing,” is now the home to four different schools.

Badger Ridge Middle School and Verona Area Core Knowledge Charter, which shared a building directly to the north of the former high school, are moving into the main building of the old high school.

In turn, the former Badger Ridge building has become Sugar Creek Elementary School, which is leaving an outdated building in Downtown Verona built in 1956.

The K-wing building of the former high school campus now holds the district’s two other charter schools — Verona Area International School and New Century Charter School — which had been located in the Stoner Prairie Elementary School in Fitchburg and a century-old building attached to the former Sugar Creek, respectively.

Gorrell said the school rearrangement plan, referred to by the district as “lift and shift,” was developed after a 2015 referendum to purchase the land the new high school was built on and another parcel for future school development.

The moving of schools gives the district enough space capacity to absorb growth at all grade levels for the next five to seven years, he said.