Check out the renderings for Summerfest's redesigned Uline Warehouse stage 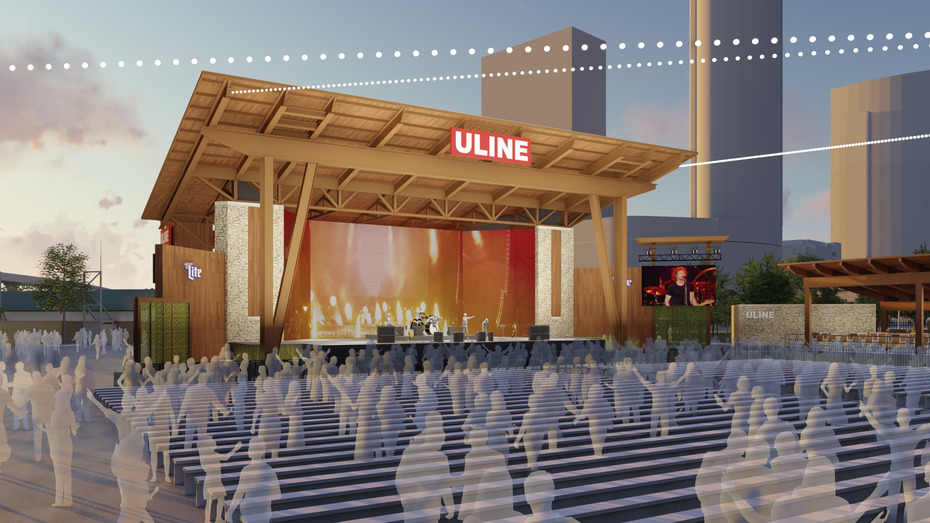 Expanded capacity, a video screen and an elevated VIP area are all on deck for Summerfest's built-from-scratch redesign of the Uline Warehouse stage.

The world's largest music festival Tuesday unveiled renderings and details of the stage on the northern end of Maier Festival Park on Milwaukee's lakefront.

A permanent bar, new ADA viewing, and a wheelchair and stroller information center are also part of the design. The new Uline Warehouse will have upgraded lighting and sound systems, and the design incorporates locally sourced Lannon stone and cedar. The video screen is a first for the stage, and the VIP area is also a new element, and will include restrooms and a bar.

It's the first redesign of the stage since 2003. Pleasant Prairie-based Uline has been a festival sponsor since 2011, and in late 2017, announced a seven-year sponsorship extension that included the stage redesign. Financial terms of the deal were not disclosed.

The Uline Warehouse redo is part of expansive renovations on the Summerfest grounds that began about eight years ago. More than $65 million has been spent on improvements, from the introduction of the BMO Harris Pavilion in 2012 to redesigned entrances and built-from-scratch remakes of the Briggs & Stratton Big Backyard, the Miller Lite Oasis and the U.S. Cellular Connection Stage.

All of the renovations, including those for Uline Warehouse, have been designed by local firm Eppstein Uhen Architects. The Warehouse will be completed in time for Summerfest this year, which runs June 26 to July 7 (with July 1 off).

Eppstein Uhen is also behind the redesigned American Family Insurance Amphitheater, with construction underway. The $50 million project will be completed in 2020, and include VIP areas and new food and beverage vendors, but elements will be done before this year's opening day, including a higher roof line and new backstage facilities.

Summerfest has announced three shows for the 23,000-capacity amphitheater for this year: Jason Aldean with Kane Brown June 28, Bon Iver with Lord Huron and Julien Baker for June 29, and Ozzy Osbourne with Megadeth July 4.

Bob Babisch, Summerfest's longtime vice president of entertainment, said in mid-December that about 40 percent of the grounds stage headliners had been locked in, and about five or six amphitheater shows were confirmed. Amphitheater announcements are expected to pick up again this month.