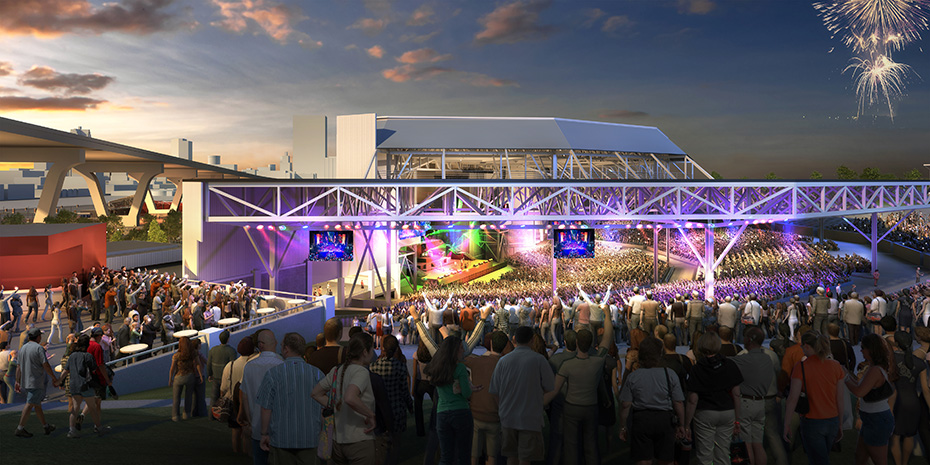 When the amphitheater was first built more than 30 years ago, Uhen and his firm, Eppstein Uhen Architects, were involved in the design process. It's only natural then, as the amphitheater undergoes a $50 million revamp, that EUA would lead the design, including producing the renderings that Summerfest released Wednesday.

Uhen presented the renderings at a news conference at Summerfest's headquarters Wednesday morning. The following are his annotations of what each rendering shows.

"One of the things that is evident when you look at this first rendering is the size of the building and the scale. This will have a completely new, modern look and open feel. Each level will be expanded to include added hospitality decks, enhanced food and beverage areas, enhanced and expanded food offerings, also improved backstage and production areas, and yes, a lot of women have been asking about this, it will have many new restroom facilities."

"This is a view entering the ramp of the north concourse, entering the north side of the bowl. Patrons, as you can see will be welcomed by new and enhanced video monitors and video screens and widened areas to be able to enter and exit the facility with easier access.

"Also, you see the vertical element there. There will be two new elevators that help us to provide better vertical access to all levels of the facility. There will also be architectural lighting that will add to the drama and provide detail and safety for the patrons."

"This a view from the new seating bowl. You'll see the most dramatic change is the step in the roof itself. We will be cutting the existing roof into two sections and raising the front section above the new stage and above the red seats 26 feet to allow for a 65-foot clear production area above the stage. This will enhance the ability for acoustics, for sound, for lighting. Also, this will provide us specifications that allow us to compete with the absolute highest and best world class venues anywhere in the world, attracting the best acts.

"This (rendering) is full of people, so you can't see the seats, but the seats will be new in both the red and yellow sections. Aisles will be added to allow patrons easier access to their seats and fans will also enjoy new enhanced video monitors and video screens throughout the facility. We're also pleased to announce today that the entire seating bowl will be brought up to ADA accessibility standards."

"As part of phase two, we will be providing additional viewing platforms and viewing areas that you'll actually be able to see the stage and see the show from the food and beverage areas. You can see on the very left hand side of this rendering, that will be a new expanded concourse area that will allow you to see the show during the show. This will be a game changer in terms of changing the whole social aspect of being in the amphitheater."

"This is a view from a VIP deck. The view does speak for itself, the view I mentioned earlier of the downtown as well as the grounds. You can also note that you do see the BMO stage there. Yes, you will also be able to see the BMO act from this VIP vantage point. We do feel that will add additional experiences to this deck."