The show must go on, as the saying goes.

The festival's parent company Milwaukee World Festival Inc. spent $51.3 million on a two-year renovation of Maier Festival Park's largest venue — only to cancel 17 concerts (and Summerfest itself) in 2020 because of COVID-19.

Now with COVID cases dropping thanks to growing vaccinations, the live music industry is roaring back, with the amphitheater hosting the first huge Milwaukee concert since March 2020 with the Foo Fighters on July 30.

A month before that show — one of 19 planned for the amphitheater this year — Summerfest officials showed off their upgraded venue to media Monday.

"Everyone took a gut punch in 2020," Milwaukee World Festival Inc. President and CEO Don Smiley told reporters Monday. "When this place is roaring and ready to go, we'll know we're back."

About 800 more seats have been added in the amphitheater's seating bowl, with all the seats replaced including new cupholders, inside the 24,000-person-capacity venue. That includes 270 seats for music fans with disabilities and their companions across every level, and a new elevator to help guests access different areas of the amphitheater.

There are five aisles now versus three for easier entry and exits; whereas each row had about 74 seats between aisles before, the average is now about 30, with no more than 45 seats in a row between aisles. The bleachers and grass area at the top of the venue have also been replaced, and with enhanced sight lines and improved acoustics throughout the amphitheater.

The amphitheater now has 15 bars, up from eight before the renovations. Point-of-sale locations for food, drinks and merchandise have more than doubled to nearly 200 from before, and the number of women's restrooms has more than doubled, from 74 to 150.

"That will all mean shorter lines and faster service," Smiley told the Journal Sentinel in an interview Monday. Milwaukee World Festival will be preparing the food in the amphitheater.

"In the past, we had a very limited selection; now, the menu is a little bit more expansive," he said. "There was really no reason to go outside (with other vendors). We have 40 other restaurants on the grounds, and a lot of people eat before they get here." 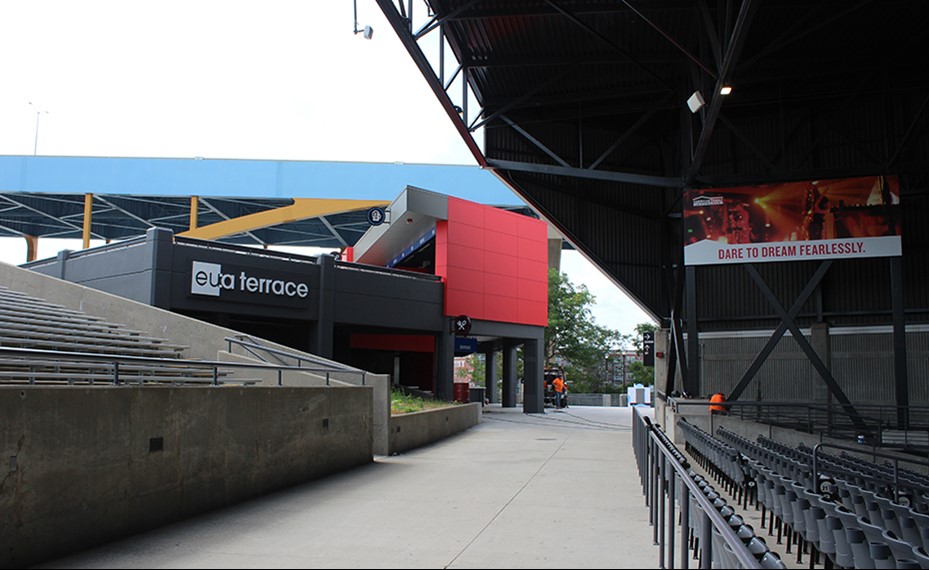 More than 20,000 square feet of space has been added to the concourses, which are decorated with bold-face lyrics from signature hits from scores of past Summerfest acts. Many of those past amphitheater artists are also named on a "Wall of Fame" along an entrance ramp, along with sponsor names.

But the most dramatic addition to the venue might be the new gathering spaces throughout the venue. Two are private and reserved for donors who committed between $100,000 and a million dollars over the next five years for the construction project, including one that includes lounge chairs and views of the Milwaukee skyline and BMO Harris Pavilion adjacent to the amphitheater.

Three concourses with chairs will be open to the public. Two of them on the 200 and 300 levels offer views of the Milwaukee skyline and Maier Festival Park. One of them, the EUA Terrace on the 300 level (named after the building's designer, Milwaukee-based Eppstein Uhen Architects) includes a view of the Hoan Bridge and downtown skyline and also views down on the seating bowl and stage. it's a first-of-a-kind feature for an amphitheater, Smiley touted Monday.

Some of the renovations were completed before the pandemic. Construction began in fall 2018, with 19 new dressing rooms, seven loading docks, the installation of six high definition video screens and digital displays, and a new flexible stage finished before Summerfest 2019. The roof was also raised in 2019 from 39 feet to 65 feet to accommodate stadium-sized productions.

That's paying off this year, with two shows during Summerfest otherwise routed for stadiums: Green Day, Weezer and Fall Out Boy will co-headline the amphitheater on opening night, Sept. 1, while Guns N' Roses will close the festival Sept. 18.

Hunzinger Construction Co. oversaw construction on the 12.5-acre site, which has involved 989 workers to date. The project is part of more than $165 million spent on renovations at Maier Festival Park since 2006, including construction of a brand-new stage, the BMO Harris Pavilion, in 2012, and new this year, the upgraded Northwestern Mutual Community Park children's area and Generac Power Stage, a replacement for the Harley-Davidson Roadhouse. All the projects were privately financed.

Milwaukee World Festival officials have said the amphitheater renovations, the largest construction project in the company's history, were necessary to stay competitive, not just during Summerfest, but during the summer.

The venue opened as the Marcus Amphitheater in 1987 before being renamed the American Family Insurance Amphitheater in 2017, part of a sponsorship deal with the Madison-based company struck for an undisclosed amount.

It's hosted scores of legends over the decades — including the Rolling Stones, Prince, Paul McCartney, Whitney Houston and Tom Petty and the Heartbreakers on 15 occasions.

As a result, the amphitheater will have its busiest season in 17 years in 2021 — and will have an even busier 2022, Bob Babisch, Summerfest's longtime vice president of entertainment, told the Journal Sentinel.

Aside from the dozen main event shows at Summerfest this year — including Luke Bryan, Megan Thee Stallion, the Jonas Brothers, Dave Matthews Bands, Dave Chappelle, and, announced Monday, Twenty One Pilots — FPC Live has lined up Maroon 5, KISS, Hall & Oates, Slipknot and other acts for the amphitheater around the Big Gig.

After a devastating 2020, Milwaukee World Festival will need all the revenue it can get.

With Summerfest, concerts and other festivals at Maier Festival Park all canceled last year (it was Summerfest's first cancellation in its 53-year history), revenue was $384,017, less than 1% of the 2019 amount of $48,876,210. Consequently, the nonprofit had an $8.1 million loss before depreciation, and a $17.4 million loss after depreciation.

Aside from Summerfest — Sept. 1 to 4, 8 to 11 and 15 to 18 — and one-off concerts at the amphitheater and pavilion, Maier Festival Park will host Milwaukee Irish Fest, Mexican Fiesta and other events this July through October. But several annual events at the park have been called off for a second year, including PrideFest, Polish Fest, German Fest and Festa Italiana.

Talking to the Journal Sentinel on Monday, Smiley said masks will not be required at Maier Festival Park for shows and events.

While the amphitheater is ready to go and the headliner lineup is complete for 2021, there are still some big challenges two months out from Summerfest.

Summerfest is looking to hire 2,000 people to make the festival function, hosting its first job fair this past Saturday to try and fill spots.

In years past, much of the seasonal staffing would be handled by teachers and students. But schools will be back in session when Summerfest returns this year (later than planned because of COVID-19), and the festival will be running on Thursdays and Fridays.

Smiley said the festival has been in touch with past employees including teachers about returning.

"We need fewer people between noon and 2 p.m. A lot of teachers could get here at 5 or 6 o'clock," Smiley said. "Staffing in general has been a challenge, as it has for everyone. Everyone is looking for help."

Another ripple effect of staffing issues across the city: The Milwaukee County Transit System has canceled its special service to Summerfest due to a shortage of drivers.

Smiley told the Journal Sentinel festival officials are still working on a privately executed transportation plan to make up for the canceled service.