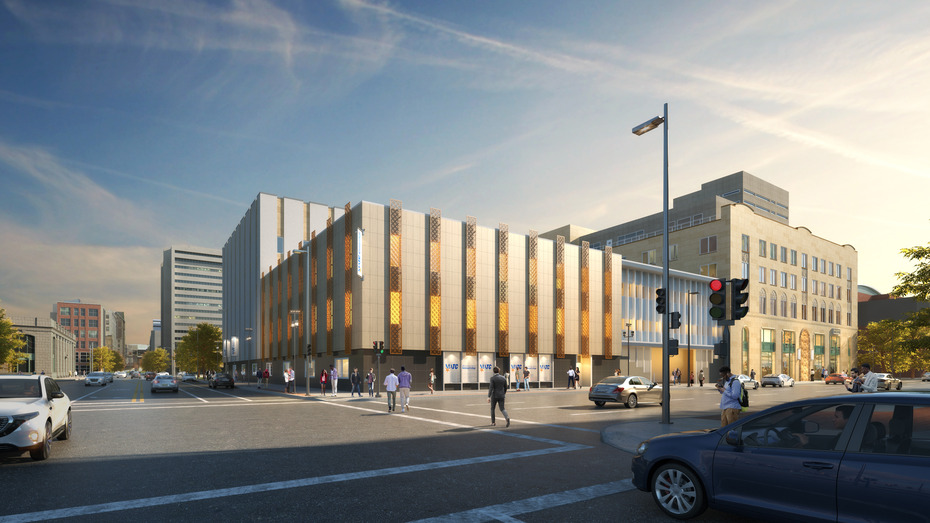 Reimagining a 1962, 115,000 sq.-ft. building that was previously occupied by the long-standing Milwaukee Journal Sentinel newspaper, are developer J. Jeffers & Co. and Eppstein Uhen Architects (EUA). Their vision for the $27.7 million project is to help provide a truer campus experience for some of the more than 30,000 students who attend MATC, and includes 27 studio apartments set aside for students earning less than 60% of the area’s median income. The building will also include two-bedroom and four-bedroom units, totaling 217 beds across all the units, to be completed in time for the 2021-2022 school year. More than 160 parking spaces totaling approximately 90,000 sq.-ft. will be provided in the lower levels of this and an adjoining 1924 building that is also undergoing adaptive reuse construction by the same team.

Funding
Making this project a reality for the MATC students means reliance on historic preservation tax credits, private financing and $1 million reprogrammed from an existing tax incremental financing (TIF) agreement. The TIF money will be used for the building’s façade restoration and creation of the residential units. In exchange for the use of TIF funds, the project will guarantee that 40% of the total construction work hours will be performed by unemployed or underemployed city residents and at least 25% of the project’s contract value will go to certified disadvantaged businesses. Based on the success from numerous previous projects and contracts already awarded, CG Schmidt anticipates exceeding these requirements.

Because of its use of historic tax credits, the development must also adhere to requirements from the National Park Service that the nature and general aesthetic of the historic icon be preserved.

When a significant development, design and construction challenge, this unique project will not only provide invaluable affordable housing options for MATC students, it will also revitalize a long-idle landmark in the heart of downtown Milwaukee.

Historic Building Reimagined for the Future
Once home to the Milwaukee Journal Sentinel daily newspaper, this 1924 building is currently being remodeled into 103 apartments. The first floor will house the main lobby and amenity areas. The original multistory press room will be converted into an 8,800-sq.-ft. restaurant and brewpub, and underground parking will be in the lower half of the former press room. The unit mix will consist of studio, one bedroom, two bedrooms and three-bedroom apartments as well as street-accessed walk-ups.

The developer decided to focus on affordable housing for two reasons. Once is demand. As more hotel, restaurant and other service industry jobs are created downtown, there is a growing need for apartments those workers can afford. The other is supply. Downtown Milwaukee continues to see more higher-end apartments being developed.

Funding Components
Federal affordable housing tax credits are being used to pay for some of the $27.7 million project. Developers who receive them must provide at least 85% of a building’s apartments at below-market rents to people earning no higher than 60% of the local median income. The developer also received two loans from the city that were approved by the Milwaukee Redevelopment Authority. The money is being provided through the authority’s revolving loan fund for environmental cleanups tied to commercial developments, which will pay for removing asbestos and lead paint, pollutants in the soil and groundwater, and any other environmental cleanup work.

The Result
Utilizing an integrated design and construction process, this historic 1924 building—that was primarily vacant—is being repurposed to bring affordable housing to downtown Milwaukee.