Treehouse conference rooms. Glass domes filled with plants. A gigantic spaceship-like building. These are some of the incredible new features employees enjoy at Microsoft, Amazon and Apple headquarters, respectively.

But it’s not just tech royalty engaging in innovative design. Some of the coolest workspaces in the country can be found at companies small and large in towns from Hoboken, N.J., to Frisco, Texas, to Sheboygan, Wis.

In a hot labor market with no cool-down in sight, business leaders nationwide are finding that a cutting-edge workspace provides a one-of-a-kind recruiting tool that can also improve teamwork, creativity and productivity.

HR leaders at online retail business Custom Ink LLC in Fairfax, Va., have seen this firsthand. When recruits visit, they are hit with the fresh, contemporary design of the building, says Darcy Smith, head of team development. The office walls hold art made by the creative staff and photos of sports teams and families at reunions wearing the T-shirts Custom Ink makes. “They’re able to get a sense for what our story is in our space,” Smith says.

To be sure, skeptics may question the point of a Ferris wheel, climbing wall or designer kitchen. An amenity that sounds ridiculous to one organization, though, might be just right for another. The key is designing a place that reflects the culture of the company.

Start by identifying the things that are important to your organization’s core values and tie them into your physical space, says Humera Kassem, chief HR officer at Jamba Juice Co.near Dallas. For Jamba, that means bright colors everywhere mimicking the hues of the fruit smoothies it sells, and natural light in common areas where everyone can enjoy it.

“In a world where [job seekers] can work anywhere, what makes them want to come? You have to give your people a reason to opt in,” says Jim Truhan, director of workplace strategy at IA Interior Architects, which planned the Jamba Juice offices.

Your Brain on Office Space

While these spaces once were made up of private offices and cubicle farms, there has been a movement in recent years toward open setups with little separation between personal workstations—a design intended to promote collaboration.

“I would never want to move the pendulum back to all closed,” Smith says. “You don’t feel connected with other human beings.”

At the same time, business leaders and design experts are realizing the limitations of all-open layouts, with a flurry of recent studies indicating that open offices may actually discourage people from working together. The noise and lack of privacy could prompt more people to work at home or tune others out with headphones. Since different types of work require varying levels of collaboration, focus and quiet reflection, ideal workplaces incorporate room for both togetherness and alone time.

?For example, Custom Ink’s facilities include beanbag chairs, where workers can plop down with headphones to tune out the noise, as well as “huddle” rooms where they can find privacy, which is particularly—but not exclusively—valued by introverts.

Indeed, evolutionary programming in all human brains compels us to seek nooks to escape the fray at times, says John Medina, a biochemist who studies the connection between brains and architecture. He’s an affiliate professor of bioengineering at the University of Washington and a consultant in the Seattle office of architectural firm NBBJ. (NBBJ was involved in designing Amazon’s domes.)

Our brains evolved to help us solve problems related to survival in the outdoors and to keep in near-constant motion, Medina says. That’s pretty much the opposite of an office worker’s conditions, yet we’re still wired to survey our surroundings for threats—whether they come in the form of a saber-toothed tiger or a toxic boss—and then retreat to a sanctuary once we feel safe.

The most creative spaces are not open offices or “rabbit warrens” of cubicles, he says. Rather, the best ones are designed so workers have access to both types of environments.

After generations of building horizontal workspaces, architects are better understanding the need to go vertical, too. Amazon’s domes contain perches where employees can look out over the campus.

One obvious drawback of open space is the noise. Stress hormones are released starting with 55 decibels of sound?the same level of typical human conversations, Medina explains. “You can watch productivity begin to decline” when noise rises to that level. Human voices and dialogue are particularly hard for our brains to ignore.

Because everyone works differently, experts recommend giving individuals some freedom to customize their areas. Credenzas in Jamba’s workspace have cushions so colleagues can sit to collaborate, for example, but one employee who doesn’t like that practice keeps the cushion hidden under the desk.

“No two brains are the same, even in twins,” says Ryan Mullenix, a partner at NBBJ in Seattle, which is testing the concept of customization on its own workers. The architectural firm’s New York City building is equipped with sensors that measure daylight, noise and temperature. The goal is to help people find the best spot for their work needs and personality?and to eliminate some of the wandering they do looking for a place to settle in. That could reduce employees’ stress over not being able to control their environment and save companies from spending money on square footage no one wants to use, Mullenix says.

Diffuse natural light is a big factor in creating the best workspaces. An ideal building would have changing light and color like the outdoors, where humans spent the first 99 percent of their existence, Medina, the biochemist, says. Blue light, like the sky, can spark activity. The color green can help us focus. And orange light, he says, can aid in decision-making because sunsets signaled to ancient humans that it was time to plan how to survive the night.

Ceiling heights are also important, according to Mullenix and Medina. Lower ceilings are good for buckling down on day-to-day tasks. Higher ones are great for big-picture thinking, problem-solving and creativity.

Waterfalls and greenery can reduce stress, improve productivity and boost people’s immune systems. These natural elements help reduce the anxiety caused by “arousal fatigue,” which comes from having too much to do and not enough time. “People are realizing this connection to nature should not be cast aside,” Mullenix says.

If You Build It, They Will Come

HR leaders at many organizations are playing a larger role in design. This can include seeking employee input before and after a move or a large purchase. At insurance company Acuity in Sheboygan, Wis., workers voted on which furniture to buy.

The team at Quicken Loans in Detroit regularly surveys people about their surroundings, which informs interior design decisions. “Their engagement is high because they have a say in it,” says Melissa Price, CEO of dPOP, Quicken Loans’ sister company, an interior design business.

HR professionals at Jet.com in Hoboken, N.J., also sought input from workers and incorporated it into the design plan for its office. “You want your employees to feel like the space we’re building is truly for them,” says Kristin Reilly, vice president of people experience for Walmart, which owns Jet.

?When Custom Ink relocated, leaders made a video for employees about why it was moving and invited them to leave sticky notes in the cafeteria with suggestions for what they wanted in the new headquarters.

“You’ve got to make sure you get the buy-in from various levels,” Smith says. “If you get too far down the path and don’t have those perspectives, you are doing rework, and that’s expensive.”

Flexibility is a crucial feature in office design now. Companies will have to alter the physical environment as technology changes and more project-based work requires new teams to be formed on an ongoing basis. Jet.com, for instance, housed 150 employees in its new Hoboken office when it moved in 2015. Now there are 1,200.

“We talk about a beautiful shell,” Mullenix says. The space must be able to morph over time. Changes might be needed after the space is designed but before construction is finished, so business leaders likely need to leave some decisions until the last minute.

The bottom line for HR leaders is to understand that the best workspace won’t be a cookie-cutter solution. “It’s not about anything any other company is doing,” Reilly says. The question is, “How do we build for us?”

“Surprise and delight” are baked into the design at advertising firm ISL LLC, which has 52 employees, says Josh Strupp, associate director of marketing. Features include bright colors, pet-friendly work areas and collaborative spaces.

The fully stocked kitchen has the vibe of a hip urban loft. Employees use it for happy hours, spring-roll-making lessons, home-brewing demos and waffle parties.

“It’s the people. It’s the environment. I don’t know which creates the energy, but everyone is collaborative,” Strupp says. 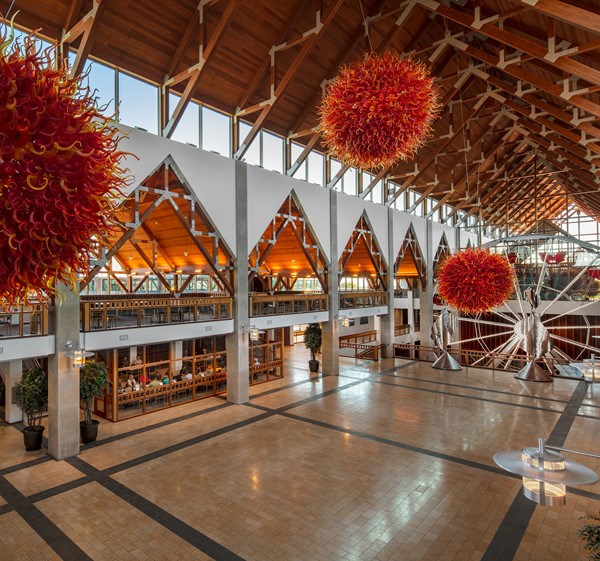 What’s an insurance company doing with a Ferris wheel in its atrium? Community members ride it at charity events, while Acuity’s 970 employees enjoy it at parties. CEO Ben Salzmann points to a top performer he hired who had fond memories of riding the wheel as a kid.

The company’s space was designed with culture in mind, vice president Sheri Murphy says. A theater-in-the-round symbolizes a flat organizational structure where all employees are equally welcome to offer input. Yet employees can still climb—to the top of the large rock wall.

Oversized head shots mark where employees work—that is, when they’re not racing adult Big Wheels or waging a Nerf gun war. “It’s a space where people are having fun, working together, trying to achieve greatness as a team,” says Chief People Officer Mike Malloy.

Quicken Loans, a finance and tech company that employs 17,000 people in the Detroit area, occupies a series of historic properties whose past lives are given a nod in the design. For example, a former bank building’s massive vault is now a conference room.

When the principals at printing company Custom Ink LLC decided to move to a trendy development outside Washington, D.C., they asked for as many staircases as possible. The main stairs spiral around a mobile with 1,000 vibrant origami cranes folded by the first 1,000 employees.

“It’s a feeling of being part of a broader team,” says Darcy Smith, head of team development.

Bright colors and natural light aim to spark creativity. The walls hold examples of the art the business offers customers on T-shirts and other items. Communal tables in the cafeteria promote collaboration.

When employees tell Jamba Juice Co.’s chief HR officer, Humera Kassem, that they’re planning to interview a prospect by phone, she urges them to reconsider.

“Our building is, hands down, one of the greatest selling points,” she says of the facility, where 85 employees work. “It makes me happy when I walk in.”

The space, which offers loaner bikes and an onsite smoothie store, reinforces the restaurant retailer’s focus on health.

The glass walls double as whiteboards, and the color scheme is as vibrant as a bright basket of fruit.

Jet.com’s signature purple is everywhere, from the elevator lights to the pool table felt.

Since the e-commerce company moved into its new building on the waterfront overlooking Manhattan in 2015, it has grown from 150 employees to 1,200. That expansion has required flexibility in the design of the office.

Even the CEO and other leaders sit in open spaces. And everyone moves once or twice a year so they all get the spectacular views of the city skyline.