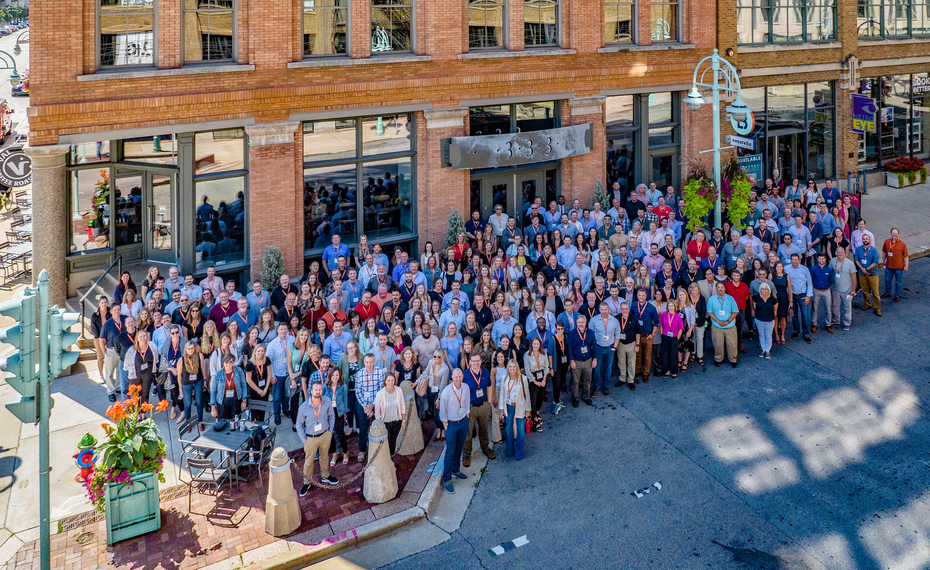 Founded in 1907, Eppstein Uhen Architects (EUA) is an over 110-year-old architecture, planning and interior design firm committed to elevating people’s potential through the built environment.

Starting from humble roots, founder William Herbst and each of his successors placed a high value on the importance of building relationships in professional and geographical circles. They kept their finger on the pulse of market stability, staying loyal to clients and diversifying as necessary. This people focused approach has formed strong client relationships that have supported EUA through two world wars, the Great Depression and two recessions that each caused momentary downsizing.

1920s: Certain types of work would have been difficult to find during these times, but the firm remained focused, fluidly adapting to market challenges. This included supporting governmental projects that directly supported the war effort and, in the teens and early 1920s, Herbst recognized that to keep working with the Catholic Church and Wisconsin Bell, two of his steady clients, he needed to create building prototypes as a cost saving advantage for his clients.

1980s: After a successful merger with another local architecture firm and instilled new leadership of Mark Pfaller, FAIA, the 14-person Pfaller, Herbst & Associates faced the difficult recession of the early 1980s. After this time, Sam Eppstein became President and is credited for establishing the successful foundation for the firm known today as EUA. Looking forward to continued longevity, Eppstein built a company focused first on solid business principles--client service, community commitment and relationships--and second on design. With successful planned successions and transitions from one president to the next over the years, each believing that the firm was bigger than an individual, EUA has grown to become one of Wisconsin’s largest and most diverse architectural practices.

The late 1980s and early 1990s brought about a new era of strategic level planning for the firm. The core group of leaders decided to diversify and become more specialized and a studio concept was created in which architectural employees were divided into distinct market areas: initially residential, office, senior living, industrial, public/educational and retail. During this time, the firm was awarded several projects that increased the visibility in the Milwaukee community and ultimately catapulted the position EUA holds today in the local architecture community. Significant projects during this period included the Marcus Amphitheater, The Osthoff Resort, Strong Capital Management, Grand Avenue Middle School and the Milwaukee Education Center.

1990s: When Greg Uhen joined the firm, he brought new ideas. Taking Eppstein’s service commitment to a new level, Uhen brought an increased dedication to design and relationships collaborating with Eppstein using their complimentary and innovative philosophies to strengthen the organization for further growth. By the late 1990s, with over 90 employees and a strong commitment to the Milwaukee community, EUA was prepared to take advantage of the massive building boom both locally and across the country.

2000s: With plans for continued growth, EUA purchased, renovated and moved into a five-story building on the National Register of Historic Places located on the corner of Milwaukee and Chicago streets in Milwaukee’s Historic Third Ward. Uhen recognized the impact environment can have on employee acquisition, engagement and retention and personally supervised the design of the new headquarters. The resulting space promotes and fosters social interaction via central collaborative areas, open workspaces, multiple conference rooms and a kitchenette on each floor. In 2000, shortly after moving into the new space, the office received a Merit Award from AIA’s Wisconsin chapter and was awarded the “Best Work Environment” award by The Business Journal of Milwaukee. To continue to be a workplace of choice, EUA has completed additional renovations over the years to enhance the employee experience including the rooftop terrace addition in 2016 offering a multi-purpose area for year-round work and social functions with a commanding view of the Milwaukee skyline. During this time, Greg brought on Rich Tennessen a future leader within the firm.

2005: EUA opened our second location in Madison, fueled by a united team of architects and interior designers passionate about their community. This milestone aligned with EUA’s work supporting renovations of a significant local historical landmark of the Goodman Community Center. Shortly after this announcement, to mark EUA’s 100-year anniversary, the Eppstein Uhen Foundation was established. The 501(c)(3) charity foundation is focused on improving the quality of life in the communities in which EUA lives and works. One of the largest sources of funding for the foundation is EUA’s annual Beyond Design Bike Tour (BDBT), which kicked off from Milwaukee to Madison to celebrate the inception of the Madison office. Over 15 years, the BDBT has raised over $700,000 for local Wisconsin non-profits. EUA continued to grow and evolve it's core market offering, bringing on Kristin Dufek to help build EUA's recently created healthcare studio.

2010s: EUA continued to grow in reach and size. During this time Rich Tennessen became President and a few years later Kristin Dufek became Vice President. In August 2016, EUA acquired a local Milwaukee firm, Kindness Architecture, a seven-person team, that worked with multi-family, mixed use and senior living clients. Then, in May 2017, EUA announced expansion to the Rocky Mountain region through the acquisition of Denver-based architecture and interior design firm Burkettdesign and their 27-person staff. EUA continued to see growth in clients, projects and staff; making it one of the largest architectural firms in Wisconsin, with projects and presence throughout the U.S.

2022: EUA again expanded their reach by announcing a merger with Performa, a fully integrated architecture, engineering and design firm with offices in Green Bay, Wisconsin and Atlanta, Georgia. This merger expanded EUA’s reach into new industries and geographic markets, with a total of five locations and broader capabilities (including engineering and environmental graphic design) to serve clients. Doug Page, CEO and Principal / Owner of Performa joined EUA’s Board of Directors as Vice President and leader of the Green Bay and Atlanta studios. Additional Performa owners Brian Netzel and Matt Marek became EUA shareholders. The addition of structural, mechanical, electrical and plumbing engineering services bolsters EUA’s expertise and ability to deliver integrated design to our clients.

Future: EUA is planning for strategic future growth that includes continuing to vet opportunities for geographic expansion, market and service growth, leading quality designs and forward-thinking, integrated architectural and engineering project delivery to meet the changing needs of our clients and employees.

Learn more about EUA: About Us | Our Culture | Our Services | Design Philosophy | Giving Back | DEI Commitment